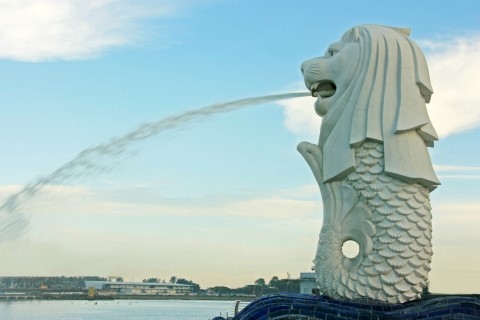 And stocks slip from one-year high.

Singapore cut the top end of its 2016 growth forecast after the economy expanded less than previously estimated in the second quarter. Gross domestic product expanded an annualized 0.3 percent from the first quarter, the Ministry of Trade and Industry said Thursday. That compares with last month’s advance estimate of 0.8 percent, which was also the median forecast in a Bloomberg survey of nine economists. The economy grew a revised 0.1 percent in the first quarter. Read more here.

Singapore’s offshore oil services companies and marine engineering firms are leaving it too late to reorganize finances to survive an industry slump, raising the risk of steep losses on their bonds, a debt restructuring consultancy said. The lack of urgency means lenders have time to take on more security for their loans, leaving bondholders with poor recovery prospects, Kurt Metzger, a Singapore-based director at GEM Advisory, said in an interview. Find out more here.

Asian stocks retreated from an almost one-year high as Japanese shares dropped after the yen rebounded and as commodity companies led losses across the region. The MSCI Asia Pacific Index slipped 0.2 percent to 138.35 as of 9:02 a.m. in Tokyo after closing Tuesday at the highest since Aug. 11. Material and health-care shares fell the most on the regional benchmark gauge. Japan’s Topix index lost 0.5 percent, with exporters helping send the measure lower as the yen held a 0.6 percent gain against the dollar. Read more here.