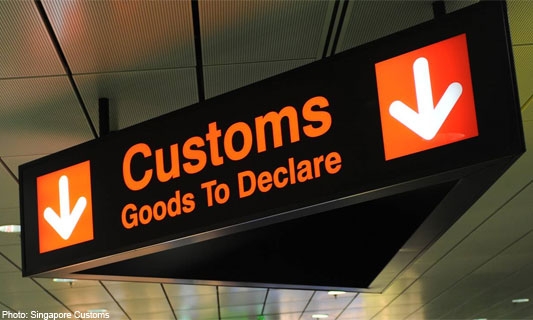 Customs officials remind Singaporeans and travelers returning from their overseas breaks to declare taxable products such as liquor at the airport or pay a $300 fine for the bottle.

"Singapore Customs would like to remind holidaymakers and other travellers arriving at Changi Airport and other checkpoints to make customs declarations at the Red Channel if they have any cigarettes or tobacco products, liquors exceeding their duty-free allowance and/or taxable items with values beyond their Good & Services Tax (GST) reliefs," said a statement from the bureau.

The Customs bureau listed guidelines on which goods are deemed taxable, clarifying misconceptions that have often caused unaware travelers to pay heavy fines for undeclared items.

For instance, the bureau clarified that all cigarettes, including those with "SDPC" markings, and tobacco products are subject to duty and GST.

There is no duty-free concession on the products, Customs added.

In 2010, a total of 24,738 persons were fined for bringing in loose packets of cigarettes without declaring them at the Red Channel for payment of required duty and GST. This is 33% up from 2009 at 18,642 persons fined for similar offences.

For liquors, Customs said beverages with alcoholic content exceeding 0.5% such as shandy and bottled alcoholic cocktail drinks are dutiable.

Taxes will also have to be paid for liquors commonly consumed for health reasons and used for cooking purposes such as D.O.M., Yomeishu, samsoo and cooking wine.

Customs said that although a traveler bringing in or purchasing liquor on arrival in Singapore is entitled to duty-free allowance for spirits, wine and beer not more than 2 litres, the following are conditions he/she must meet:

The bureau also clarified that travelers who exceed their duty-free allowance on liquor are also required to pay duty and GST.

Furthermore, Customs said that there is no duty-free concession on liquors for persons arriving from Malaysia.

"Travellers of all nationality arriving from Malaysia will have to pay the relevant duties and GST on their liquors," the bureau said.

In general, all goods, both dutiable and non-dutiable, brought into Singapore for local consumption are subject to GST of 7%.

The Customs statement also highlighted the importance of declaring taxable goods and paying the correct amount of tax for them, saying failure to do so is an offence under the Customs Act and the GST Act.

Offenders may be prosecuted in court and fined up to $10,000 and imprisonment for up to  three years.

The fine for out-of-court settlement for first time offence is 10 times the duty amount subject to a minimum of $50.

Chart of the day: 6 in 10 says Singapore Grand Prix is good for the country