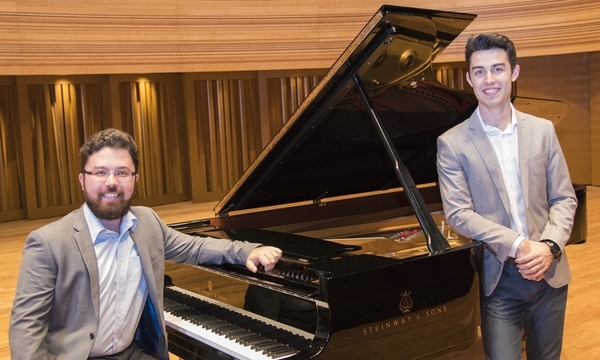 Meet these brothers with a passion for teaching music

The teaching and business goals of Aureus Academy's co-founders are in tune.

When Lawrence Holmefjord-Sarabi, co-founder of music school Aureus Academy along with brother Julius, was in Yong Siew Toh Conservatory, parents came to him asking him if they would teach their kids and were willing to pay higher rates like $200-$300 an hour.

As Lawrence was dedicated to his practicing and dreams of becoming a concert pianist, the brothers recall, he said he would help find a good music teacher that was qualified. This is when Lawrence found out that none of the schools, or even a majority of the private teachers, are not nearly qualified to teach music lessons. As someone who has dedicated his life to mastering the art of piano performance, Lawrence felt this was not the way it should be in Singapore. Thus, Aureus Academy was formed.

"Aureus Academy specializes in providing individually tailored piano, violin, guitar, and vocal lessons to students of all ages and abilities," share brothers Lawrence and Julius. "Aureus believes that one-on-one is the best environment to learn a musical instrument, but the trick is keeping students engaged while making the lessons fun and rewarding."

They note that lessons are designed to engage each student in a way that suits their learning style. Whether students are interested in learning an instrument for fun or looking for exam certification, Aureus Academy teachers tailor the lessons so they are specific to the learning goals of each student, say the brothers.

Getting the rhythm going

While other music schools engage part-time teachers and/or those with just a minimum of Grade 8 qualification, Aureus Academy only engages full-time and highly qualified teachers with a tertiary education in music, say Lawrence and Julius. The Academy boasts the most number of teachers with tertiary qualifications (90 Bachelor’s and Master’s Degrees and growing) across its centres than any other music school in Singapore.

Lawrence himself is a highly accomplished and recognised international pianist. He is also a recent graduate and full scholar of the Yong Siew Toh Conservatory of Music, National University of Singapore (YSTCM), where he was the first American pianist accepted in the history of the conservatory.

In terms of business, Aureus Academy started as a small outfit in Delfi Orchard with only five studios, five staff and 100 students, but business was booming as a result of rapid word-of-mouth on the high standards of its teachers and classes, note the Holmefjord-Sarabi brothers. After only 12 months into the business, the Academy received a significant seven-figure investment from prominent local investors.

Today, Aureus Academy has expanded to seven centres with 61 studios, four concert halls, 75 full-time staff and over 2,000 students in a mere three years. In June 2016, it also signed a five-year Memorandum of Understanding (MOU) with the Nanyang Academy of Fine Arts (NAFA) to provide employment opportunities to NAFA graduates.

"One of the most exciting things about Aureus Academy is the pool of extraordinary talent that we are attracting," say the brothers. "Many of our teachers have been educated at some of the finest conservatories and universities in the world, and have chosen to come work for Aureus Academy."