Developers moved 1,713 private residential units in Q2, with about 60% of transactions recorded in June.

Owing to the Circuit Breaker (CB) measures from April 7th to June 1st, developers postponed their new launches during the period, because sales galleries were closed and physical contact with potential buyers was barred. However, Savills notes that developers continued to release units in their previously launched projects and, together with agents, applied online channels such as virtual viewings and sales webinars to promote the units.

In total, 1,852 uncompleted private residential units were offered for sale by developers in the second quarter of 2020, down 11.5% from the 2, 093 recorded a quarter ago. This drop was fully attributed to a slump of 55.2% in the Core Central Region (CCR).

Developers pulled back their high-end launches, as foreigners who were not here prior to the lockdown, and who had in the past been a major source of demand for this market segment, could not enter Singapore. In contrast, the number of units launched in both the Rest of Central Region (RCR) and Outside Central Region (OCR) rose by 13.0% QoQ and 24.9% QoQ, respectively.

In Q2, sales in the primary market were better than expected, especially after the CB period. Developers moved 1,713 private residential units in the three months from April to June. Among these, about 60% of transactions were recorded in June.

As shown in Graph 1, at the start of the lockdown, weekly new sales from April 7th to April 12th numbered only nine across the island. Sales remained tepid in the following weeks but slowly increased from May, especially for buying activity from those buyers who had viewed properties before the CB. 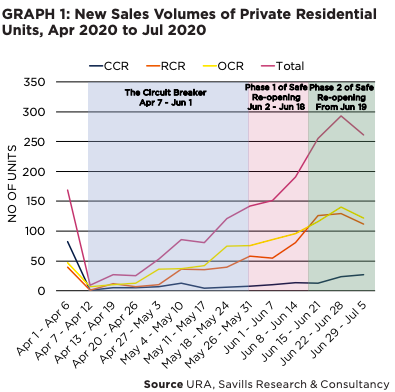 As Singapore began to gradually reopen its economy starting June 2nd, the pickup in new sales volumes was palpable by the week. Because sales galleries were still closed and physical views were still not allowed in the first three weeks of June, agencies aggressively used webinars and virtual viewings to saturate the marketplace. Attractive commissions from developers also helped to keep agents motivated.

On June 19th, developers’ sales galleries for private residential projects were finally reopened for the first time after over two months of closure. Although show flats could only be visited by appointment, some revenge buying was observed. Developers’ sales in the week from June 15th to June 21st shot up to 255 units and increased further to 293 units in the following week from June 22nd to June 28th. The pent-up demand and preparation work done by buyers during the lockdown contributed to a strong level of sales. In the meantime, reasonable take-up was seen across all market segments.

Nevertheless, the secondary market of private residential properties was quite lacklustre in the reviewed quarter and did not improve after the reopening. Island-wide transaction volumes plunged by 55.1% QoQ to 951 units in Q2. This is the lowest quarterly number since Q1/1998, and lower than the 980 recorded in Q1/2003 during SARS. The almost two-month full-scale lockdown together with an absence of an army of agents aggressively promoting each resale unit on offer were the main reasons.

Based on caveats lodged in the URA’s Reali , purchases by Singaporeans constituted 80.3% of the total private non-landed home sales in Q2. This is 2.8% higher than Q1’s 77.5% and the highest since Q1/2009. On the other hand, the market share of buyers who are Singapore Permanent Residents (PRs) continued to slide, down 1.7 percentage points QoQ to 14.7% in Q2, while non-PR foreign buyers’ market share also slipped further to 5.0% in Q2, compared with the 5.7% recorded a quarter ago.

In spite of lower transaction volumes, private home prices edged up 0.3% QoQ in Q2/2020, reversing the 1.1% decline in the flash estimates released on July 1st, according to the URA’s statistics. The price increase in the reviewed quarter was witnessed in the non-landed residential segment which inched up 0.4% QoQ, led by the CCR which rose 2.7% QoQ and the OCR which went up by 0.1% QoQ.

However, the prices of nonlanded residential properties in the RCR fell 1.7% QoQ. For the landed housing segment, prices remained flat in the quarter. The price growth in the CCR non-landed segment could have been largely driven by the pick-up of sales volume in the second half of June.
Compared with new sales, however, the resale market for the high-end sector was hit harder by the pandemic with many fewer transactions. Prices of high-end condominiums and private apartments tracked by Savills softened in the reviewed quarter, albeit marginally by 0.7% QoQ, and stood at S$2,393 psf.

According to the URA, the stock of unsold private residential units with planning approvals was 27,977 at the end of Q2/2020. Compared with the 29,149 in the preceding quarter, the decline was 4.0%. The government has further cut new supply through the Confirmed List of the GLS programme for the second half of 2020. There are just 1,370 private residential units (including 615 executive condominium units) offered to develop. This is the lowest since 1H/2016, when 1,560 units were available under the Confirmed List.