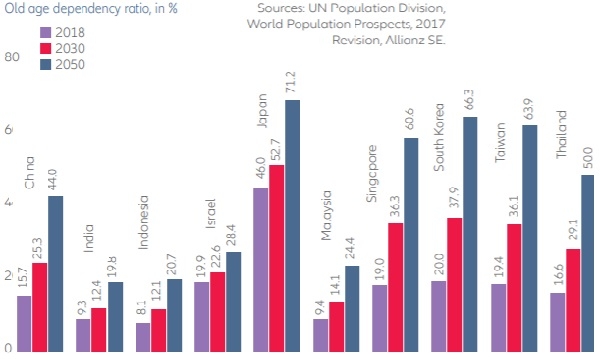 Chart of the Day: Old age dependency ratio on the rise in Singapore

Singapore sees the most rapidly ageing population in Asia alongside South Korea and Taiwan.

This chart from Allianz Global Wealth Report shows that old age dependency ratio is expected to be rise even further in the next decades.

“Along with South Korea and Taiwan, Singapore is one of the most rapidly ageing countries in Asia,” the report noted.

Singapore, together with South Korea, and Taiwan may see its old-age dependency ratio increase from their current levels from 20% to over 60% by the middle of the century, the report said.

Old-age dependency ratio refers to the ratio of people of retirement age to the working-age population.