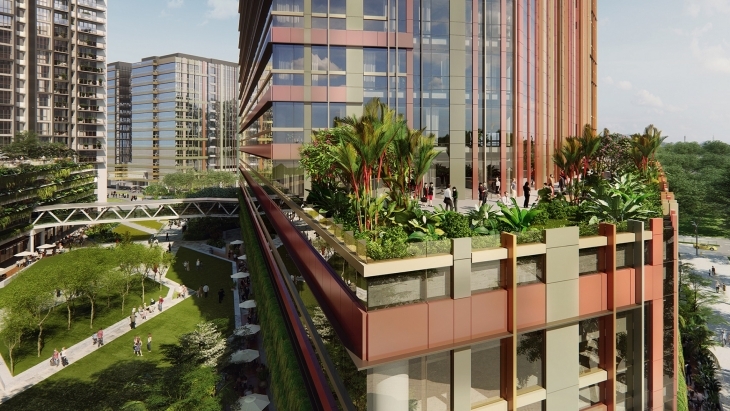 Great Eastern is its latest tenant that will be leasing 125,000 sqft at Tower 3.

The mixed-use development Paya Lebar Quarter (PLQ) already has its pre-commitment levels jump from 50% to 80% before its completion in the third quarter of 2018, DBS Equity Research revealed.

According to its report, Great Eastern will be leasing around 125,000 sqft of space or four floors at the 13-storey Tower 3 at Paya Lebar Quarter (PLQ). Moreover, IWG was in advanced discussions to lease about 52,000 sqft in Tower 1 for its lifestyle co-working concept, Spaces.

PLQ is an integrated mixed-use development with more than 800,00 sqft of Grade A office net lettable area, 340,000 sqft of retail space, and 429 residential units, named Park Place Residences. It is located next to the Paya Lebar MRT station which is on both the East-West and Circle MRT lines.

Signing office rents at PLQ are reported to be between $7-8 per square foot/month, said DBS Equity Research analyst Mervin Song.

“We believe the high pre-commitment level at PLQ bodes well for the Singapore office market, given earlier concerns that PLQ would affect demand for office buildings in the CBD and act as an overhang over the market,” he said.

Song noted that the pre-leasing at Frasers Tower which is scheduled to be completed later this year is also over 70%, indicating healthy leasing demand. “We remain confident that the Singapore office market remains on a multi-year upturn given modest new supply over the next three to four years,” he added.