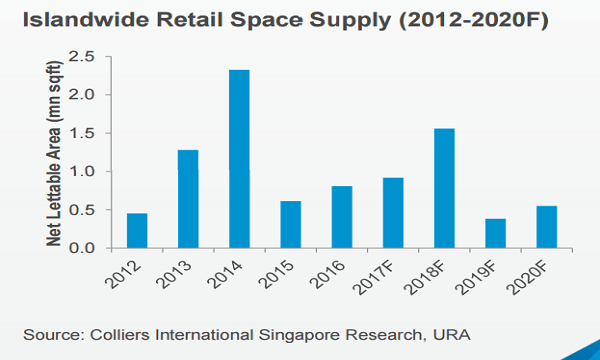 Chart of the Day: Check out the supply pipeline of retail space until 2020

Nearly 1m sqft of space will be opened this year.

This chart from Colliers shows that there will be an average annual retail space supply of 1.2m sqft for 2017 until next year.

For this year, nearly 1m sqft will be available in the market whilst more than 1.5m sqft of space will be in the pipeline for next year.

The Hillion Mall, just next to Bukit Panjang MRT (Downtown Line Stage 1) in Northwestern Singapore, opened to much fanfare on 24 February 2017, after obtaining Temporary Occupation Permit (TOP) on 30 December 2016. Based on a company announcement on 10 January 2017, it is more than 90% committed with over 100 outlets across 174,730 sf Net Lettable Area (NLA). 30% of the mall is dedicated to food and beverage, and almost 45% of the retail space is allocated to lifestyle stores. Anchor brands include supermarket chain NTUC FairPrice which will be open 24 hours, and foodcourt operator Kopitiam.

Colliers estimates that the expected average annual supply in 2017-2018F of 1.2 million sqft (115,000 sqm) exceeds the average annual supply of 1.1 million sqft (102,000sqm) achieved in 2011-2016. Large projects we expect to complete in 2017 include OUE Downtown, Marina One, Singapore Post Centre. In 2018, substantial retail space at Project Jewel at Changi Airport, Paya Lebar Quarters and North Point City will weigh in.