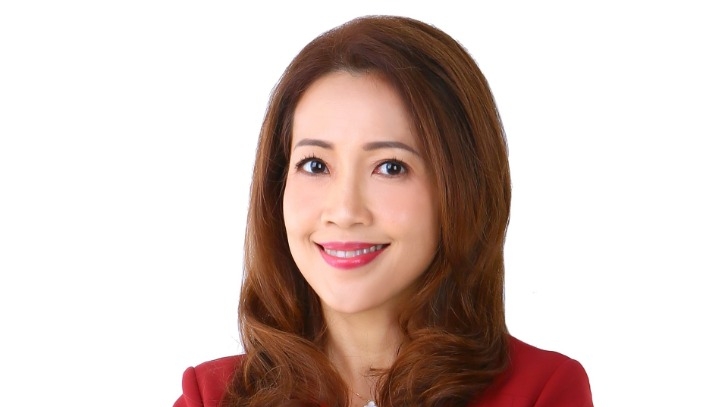 The Philippines is set to become the REIT IPO hotspot in the region this 2021.

Real estate investment trust (REITs) in the Asia-Pacific is projected to grow in both emerging and developed markets. As more investors grow to become acquainted with REITs, a number of new REIT classes have opened up, a promising move for REITs to improve in the coming years.

The majority of the REIT listings seen this year and over the past year have taken place in the emerging markets of India, Philippines, Thailand, said APREA CEO Sigrid Zialcita. This is in addition to China having announced that they have approved their pilot REIT regime.

“What we've seen in China is that they have actually been inducing a lot of the players to submit their assets for a REIT listing. In May 2021, the China Securities Regulatory Commission or CSRC, approved the registration of nine REITs, and this will essentially channel investors’ money into projects,” she said.

Zialcita said that in China, the focus of the REITs is on infrastructure projects. However, they are also seeing positive developments in fast growing markets.

APREA anticipates that the next phase of growth, when it comes to the asset class, is that it will be driven by the expansion and adoption of the REIT framework in the region's fast-growing markets – not only this year, but also into the decade.

“In the developed markets, there is also continued expansion of the REIT sector in some of places such as Hong Kong. We worked with the Securities and Futures Commission to go through the REIT code that they have and made some enhancements. There are a few companies that have lined up plans for a REIT listing in Hong Kong,” she said.

“Compared to Singapore, Japan, and Australia, there are only a few sectors in Hong Kong to get into REITs,” she added.

In emerging markets such as the Philippines, interest in REITs have picked up pace among top developers the past year.

In the February 2021 GPR APREA Indices, it was reported that the Philippines is set to become the REIT IPO hotspot in the Asia-Pacific region this year. Led by the debut of Ayala Land REIT, upcoming listings include SM Prime, Robinsons Land, and Megaworld Corporation.

“A change in regulations in the Philippines has necessitated or fast-tracked the implementation of the REIT framework leading it to become a listing hotspot. By having this REIT vehicle, developers can free up some of the investments locked in assets and recycle the capital into something else,” she said.

Mainly led by the office sector, interest in REITs in the Philippines is being stabilized by one of its largest occupiers of commercial space: the business process outsourcing (BPO) sector.

“Looking at the Philippines today, the BPO sector remains the primary support or pillar of economic activity. If we look at companies that have sponsored REITs and those planning to put their assets into REITs, these are on the office side. The Philippines is lucky and fortunate to have many of these players own these assets that allow the BPO sector to thrive,” she added.

A call to invest in REITs

In terms of having to educate players about REITs and having it as an investment option, Zialcita said that there is still a lack of information in terms of how REITs are performing.

Investors tend to invest directly into real estate, but only those deeply interested in the industry can tell the difference between this and REITs.

“They like to invest directly into real estate. Whenever I explain to our members, some become interested in this industry. We look at the prices versus what you can invest in REITs. In Asia Pacific, all the office, residential, and some other assets’ prices held even during COVID time,” she said.

“If people are waiting for prices to crash, don't hold your breath – this is not likely to happen. This is where REITs come in. REITs are an attractive proposition, because by buying REITs, essentially, you will have a slice of the real estate although it is indirect. Even in COVID times, returns on REITs are still attractive,” she added.

Zialcita said that the market cap for REITs is still increasing. Now, it is set at over US$300b but this is being skewed by Japan. Compared to the US’ one trillion-dollar REIT market, the APAC region’s REIT performance is steady and shows promising returns in the coming years.

“The breakdown of the market cap is a sizable one with Japan being the largest REIT market, followed by Australia and Singapore. There is also Hong Kong, with the rest spread across the emerging markets. In terms of liquidity, this is where I believe there's still room to grow,” she said.

“We're just seeing the tip of the iceberg. When REITs started in this part of the world, it was a very low number and compared to now where it has since skyrocketed. We reckon that once China is able to include real estate in its REIT regime, the potential will be immense. Some of the fast-growing locations, even the Philippines, have the ability to hit over a trillion in no time,” she added.

The organization found the right time for APREA to rebrand through bringing new members, new partnerships, and pushing into growth markets as well as new sectors across Asia Pacific.

APREA was founded in 2005, marking 2021 as its 16th year in existence. Zialcita said that they started with a vision to create an organization where real estate leaders and influencers across Asia can get together to network and discuss some of the relevant matters that are happening within the industry.

Zialcita said that among the changes introduced there will be more focus in other markets to serve as growth areas for the organization.

To add, their new logo is now multi-colored, to clearly represent APREA’s values: the red stands for connections, blue for transparency, green for sustainability, and amber for diversity. 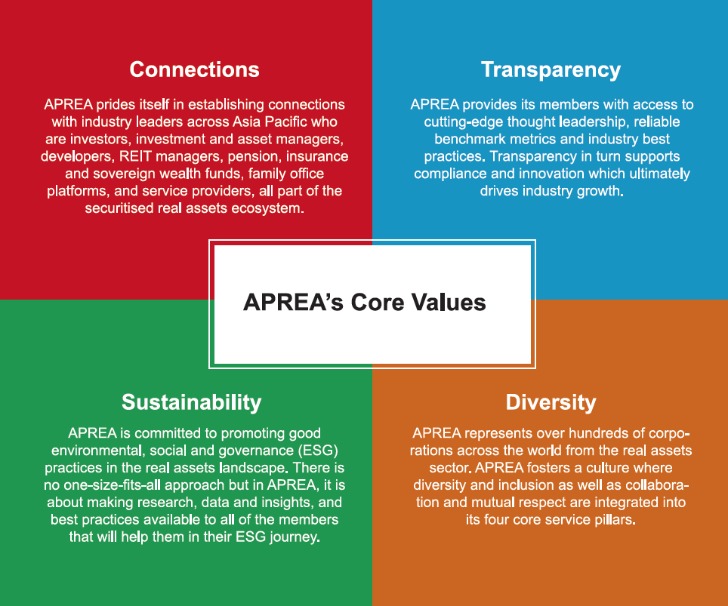 “This year, we also created something different, which is the “other markets” chapter. This serves as an incubator for new chapters in the future and is essentially a growth plan for us. We are doing this through our four service fillers, including advocacy, education and research, professional development and advancement, and our investor outreach program,” she said.

“Our membership consists of investors-- these are your REITs, asset managers, pension funds, sovereign wealth funds, family offices, and all the other institutional investors. There really can be many kinds of asset classes today,” she added.

Today, the organization has evolved into something bigger and more comprehensive, supporting the changing real estate and infrastructure sector.

“The terminology that we use today is ‘real assets,’” Zialcita said, referring to their rebranding to focus on the various sectors they now study and cater to. “We now have a presence in several strategic regions across Asia Pacific, and this include Australia, China, Hong Kong, India, Japan, and of course, in Singapore where we are headquartered.”

“The dominant form of investment has always been the office. Today, we've seen a number of our members venture into infrastructure. We consider this a natural progression like what we have done in the past,” she concluded.