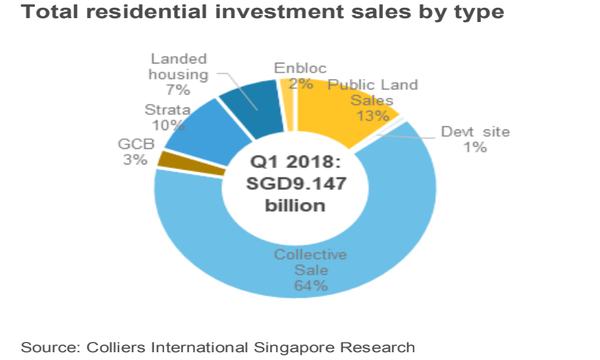 Chart of the Day: $5.8b in collective home sales dominated residential investment transactions in Q1

This marks the best performance of the segment in eleven years.

The collective home sales fever accounted for 64% of total residential investment sales in Q1, according to a report from Colliers International, with a total of 17 deals worth $5.8b registered in Q1.

This quarter alone accounted for about 72% of $8.13b generated from the 27 residential collective sale transactions during 2017, making Q1 the best showing since the second quarter of 2007.

Collective sales was also the driving force behind the stunning growth in the private residential segment which ballooned 247% YoY to $7.9b.

Colliers also notes that developers' interest in collective sale sites has shifted from suburban to prime locations. Eight sites worth $2.32b were sold in the prime Core Central Region in Q1, compared with eight sites worth $1.05b transacted last year.

"The collective sale market is likely to remain buoyant this year, barring any unforeseen events," said Colliers International managing director Tang Wei Lang. "That said, to get a deal across the line, it is also key that owners set realistic asking price. Owners’ expectations have risen in tandem with the rising property market – particularly so of late, as the cost of buying a replacement home has increased.”