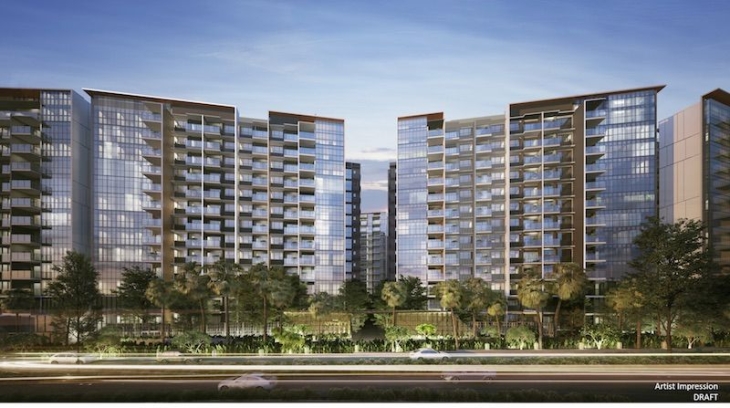 50.8% of the sales were in the Outside Central Region.

“February was expected to be a quiet month for launches and sales because of the Lunar New Year festivities. There was no new project launch for sale in February 2019, similar to February 2018,” explained Hutton Asia head of research Lee Sze Teck. During this “quiet month,” developers launched 596 units in total.

The top five best-selling new launches for the month of February were Affinity At Serangoon, which was leading the sales, with a total of 88 units sold at a median price of $1,494. The other projects included Riverfront Residences (49 units), The Tre Ver (48 units), Stirling Residences (31 units), and Parc Botannia (28 units).

“This reflects an indication of the presence of inherent demand and resilience, particularly for new projects that have been previously launched. One of the contributing factors can be attributed to the announcement of the Cross Island MRT line towards the end of January 2019, that aided with the rejuvenation of interest among buyers and investors for projects such as Affinity at Serangoon, Riverfront Residences and The Garden Residences,” commented PropNex Realty CEO Ismail Gafoor.

OrangeTee & Tie head of research & consultancy Christine Sun concurred that the sector has experienced resilient home buying sentiment, and added, “Many developers have also raised commissions to incentivise agents to boost their selling efforts amidst growing competition for buyers.”

According to Sun, all eyes will be on the sales launch of Treasure at Tampines. “Being touted as one of the key launches for the year, the 2,203-unit private condominium is the biggest private residential development in Singapore. Treasure at Tampines is expected to be one of the most attractively priced projects to be launched in the current market. Its sales performance will be keenly watched by both developers and potential buyers as a solid sales number will likely boost the buying sentiment for the entire residential market, paving the way for better sales this year,” she said.

The researcher added that home buyers will likely remain selective and price-sensitive, preferring projects that are well-located, distinctively designed and competitively priced. “Sales are expected to rev up as more projects are slated to be launched in the coming months, including Amber Park at Amber Gardens, Sloane Residences at Balmoral Road and Rivière at Jiak Kim Street,” she said.