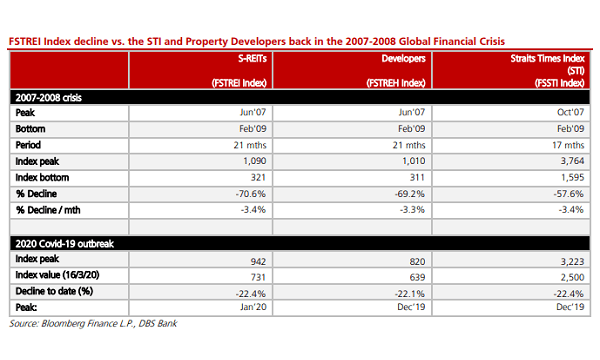 The price carnage mimics the movements seen during the GFC.

The price of S-REITs has dropped 22.4% from its peak in January, in line with the fall of the Straits Times Index (STI), according to DBS Group Research.

This is said to be caused by S-REITs’ fund outflows prevailing over fundamentals. “In our view, it is ‘who owns what’ that matters for now as a potent mix of fund redemptions and reversal in leveraged positions has resulted in investors heading for the exit in the near term,” said Derek Tan, analyst at DBS Group Research.

Such movements mimic the share price carnage seen during the 2007-2008 Global Financial Crisis (GFC). Looking back, S-REITs plunged by 70.6% in this period, which is similar to the 69.2% retreat for the developers’ index of FSTREH – both underperforming the 57.6% drop in the STI Index. The drop is more gradual and over a longer period of 21 months compared to the STI Index’s 17-month decline.

However, Tan assured that S-REITs may not suffer the same way they did during GFC.

“In our view, the steeper drop in the FSTREI can be explained by (i) the S-REIT sector’ first crisis within six years of its conception, and (ii) a credit-driven recession as S-REITs are dependent on credit to a certain extent. Since then, the sector has weathered through many global uncertainties over the past 10 years and has maintained its outperformance relative to the STI,” he stated.

Although they are expecting near-term price volatility, S-REITs will likely be able to maintain their outperformance relative to the STI.

Moreover, the lack of new supply and positive spreads between expiring and market rents would only bring minimal risks. “These factors underpin our view that the suburban S-REITs and industrial S-REITs can maintain their dividends,” Tan said.

However, DBS is projecting S-REITs’ fair value to be cut by 16% to 35% as the 10-year bond yields supporting valuations continues to decline, as well as rising risk premium impacting cost of equity.

Tan noted that there could be an upside of up to 15% for retail and industrial S-REITs, 35% for hospitality S-REITs and -2% for office S-REITs.

“We believe that markets have over-priced the downside risks for S-REITs. Our picks at this level include CMT, FCT, SUN, KREIT, Lendlease Global REIT, MINT, AREIT for its quality assets, attractive value relative to growth,” he added.