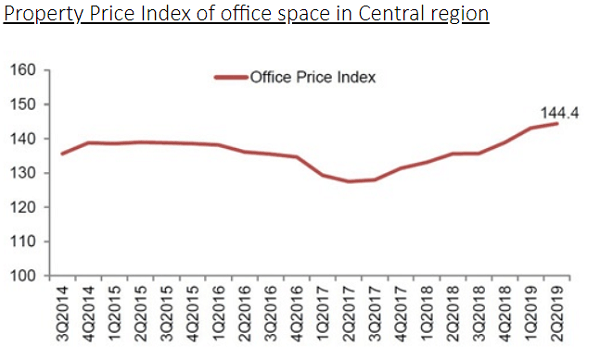 Rentals of office space also rose 1.3% in the same period.

Office prices continued to rise after rising 0.9% in Q1 following a 3% increase in the previous quarter, according to a report by the Urban Redevelopment Authority (URA).

Rentals of office space also rose 1.3% in the same period, which marks a recovery from the 0.6% decline in the previous quarter.

"This was likely supported by higher rents achieved in newly completed developments that helped push the overall average rents upwards. The positive rental performance continued to support office prices which expanded by 0.9% QoQ. That said, this quarter’s growth of 1.3% was still a slowdown from the previous quarter’s expansion of 3% -- which possibly reflects investors adjusting their outlook of prices in the office segment," Catherine He, associate director of research at CBRE, commented.

"This healthy take-up could have been contributed by prior commitments in Funan, which gained TOP this quarter, and higher occupancy in recently completed buildings," He said.

It added that the majority of the new supply has already been pre-committed, including the 85,000 sqft space in 139 Cecil Street. Fully leased by co-working operator Campfire Collective, the office space is expected to be completed by 2019.

However, He added that the outlook on office spaces looked clouded.

"[A]lthough the current supply situation is relatively tight, pre-commitments of pipeline projects have slowed considerably. These factors combined could potentially dampen rental growth prospects over the medium term," she continued.