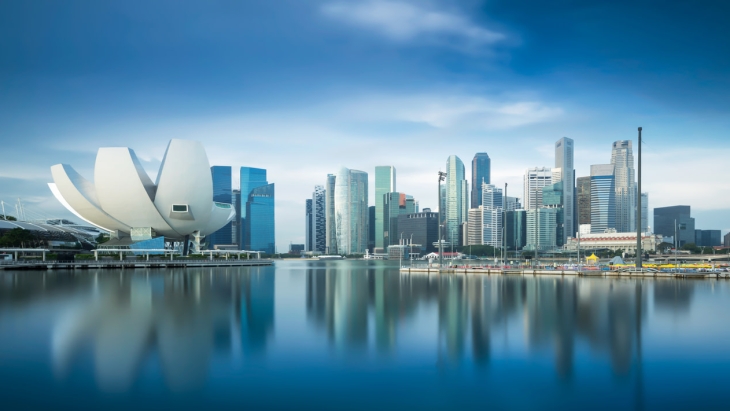 OCBC released their expectations and forecasts for the economy and the 2022 national budget, which Finance Minister Lawrence Wong is set to announce next week.

After a 'blockbuster' growth of 7.2% in 2021, OCBC predicted growth for 2022 will be lower at 3% to 5% year-on-year. However, there is an upside risk with the re-opening and addition of vaccinated travel lanes (VTLs). GDP levels have largely remained above pre-pandemic levels, about $120b, since then. In real GDP growth terms, the 7.2% YoY recorded in 2021 was also the highest since 2010.

Both the manufacturing and electronics PMIs eased slightly in January to 50.6 and 50.8, respectively, due to slower momentum in new orders, new exports, factory output, inventory and employment gauges. While this moderation into a slower Q122 is to be expected, they suggest continued support for Q122 GDP growth. However, this did not detract from the lingering global supply chain bottlenecks which were reflected in the declining imports, supplier deliveries and higher manufacturing input price gauges. In fact, recent news headlines point to persistent overseas port congestions (particularly in China due partly to its zero-COVID strategy) as well as domestic Changi airport freight cargo clearance, suggesting supply chain delays and higher shipping costs and delays remain par for the course.

The global growth prospects are being modestly pared back as reflected by the recent downgrades by the IMF and World Bank on the withdrawal of both monetary and fiscal policy accommodation, new COVID variants, slowing momentum in major economies like the US and China, as well as geopolitical tensions such as the US-Russia tensions over Ukraine. OCBC's headline and core inflation forecasts stand at 3.5% and 2.7% YoY respectively, which is a significant uptick from the 2021 readings of 2.3% and 0.9% YoY.

While recovery has not been equal across all sectors, the downside risks are subsiding

According to OCBC, the manufacturing sector constituted 23% of Singapore’s overall GDP in 2021, compared to about 19% in the five years before the pandemic, and is now 25% above its pre-pandemic level. In a similar vein, financial services and information and communications industries are also about 10% and 9% above pre-pandemic levels, whereas the transport and storage as well as the accommodation and food industries are somewhere 25% below their pre-pandemic levels. However, the labour market conditions have stabilised to the extent that overall, resident and citizen unemployment rates stood at 2.4%, 3.2%, and 3.4% respectively in December 2021, and are expected to decline to pre-COVID levels in the months ahead. In particular, retrenchments had fallen considerably across the different sectors, especially for the services sector which had previously seen a sizeable number of layoffs back in 2020 due to the consumer-facing, aviation and tourism-related industries.

Spending priorities are unlikely to change significantly in 2022 Budget

FY2021 total expenditure was estimated at $102.3b or 20.2% of GDP, which was 8.8% higher than FY2020. Government spending was mainly concentrated on social development (49.8%), followed by economic development (24.5%) and security and external relations (22.2%). Spending priorities are likely to focus on ongoing needs to fund long-term infrastructure projects, the need to reskill and upskill the domestic labour force while spending more on healthcare due to the ageing population, as well as addressing the immediate cost of living concerns and promoting a green and sustainable economy. Singapore's healthcare expenditure is set to hit $59.1b in 2030, nearly triple the $20.7b in 2018. In addition, the proportion of those aged 65 and older will account for a quarter of the 2030 population, up sharply from 17.6% currently.

With growing ESG awareness, a carbon tax hike is on the horizon

Firms operating in the country will likely face higher carbon taxes, from the current $5 per tonne of emissions to around $10 to $15 from 2024 onwards, with the potential for an even higher proposed range of $20 to $25 closer to 2030. The threshold is also likely to be lowered from the current level of over 25,000 tonnes of emissions a year which has been in place since 2019. While Singapore's current carbon tax level is among the lowest globally, it covers around 40 firms that produce 80% of national emissions. Looking ahead, more can be done to achieve Singapore’s targets to reduce emissions intensity by 36% from 2005 levels by 2030 and stabilise emissions so they peak around 2030, and to achieve net-zero emissions by the second half of this century.

OCBC concluded that as the global and domestic economies return to a greater semblance of normalcy through the course of 2022, Budget 2022 is likely to outline the policy focus and strategy to fortify economic resilience, develop a more sustainable growth model and buttress fiscal finances for the many challenges in the years ahead.