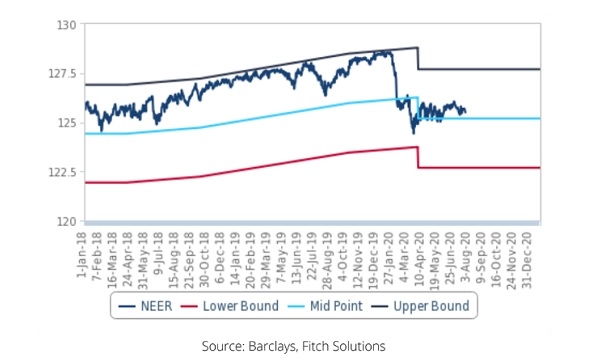 The Monetary Authority of Singapore (MAS) will likely take a wait-and-see approach in the latter half of 2020 after removing the appreciatory trajectory in its management of the S$NEER policy band at its last meeting on March 30, according to Fitch Solutions.

This is despite the central bank sounding the alarm over economic risks facing Singapore, with Managing Director Ravi Menon quoted in media reports as saying that the economic situation remained ‘dire’ and that Singapore’s recovery would be ‘slow and uneven’.

Fitch noted that further easing the policy at this point is unlikely to yield results, as weak external demand and travel restrictions will likely frustrate any efforts to encourage exports and tourist arrivals into Singapore.

Further, despite a strong rally in early June on the back of local economic re-opening and an episode of USD weakness, the SGD remains vulnerable to further sell-offs amidst a fragile and uneven global economic recovery. The report recommended for MAS to guard against this by keeping monetary policy on hold over the short-term.

The current range of the NEER between 124 and 126 is likely close to the midpoint of the policy band, which according to estimates from Barclays lies close to 125, strengthening Fitch’s for the MAS to remain on hold.

Fitch expects the global economy in 2020 to contract around 3.5%, and the emergence of a second wave of infections remained a key risk. Further, despite the strong Chinese real GDP growth figure of 3.2% YoY in Q2, the continued weakness of domestic demand in the country may suggest a delayed feedthrough of this recovery to the rest of Asia.

Meanwhile, resumption of travel might still be a distant prospect, despite the Singapore government’s efforts to reopen slowly to international travel, as these negotiations have been limited in both scale and scope.

“For instance, the government has entered talks with the EU, Malaysia and Japan, among others, to resume essential business travel. Large scale reopening of the country to tourists will likely remain off the cards over the coming months, even until the wide availability of a vaccine or effective treatment for Covid-19,” the report noted.

Finally, although SGD has enjoyed a strong consolidation in early June, the risks of further selloffs remain pronounced. One of the key drivers of that rally was a wave of economic re-openings across the globe that saw the return of risk appetites. This contributed to a broad USD weakness, especially as social unrest took hold in America.

“Further negative shocks that threaten the nascent global recovery could trigger another bout of risk-off sentiment like the one in March, which saw the SGD weaken to as much as SGD1.4610/USD on March 23, the weakest level in nearly a decade,” the report added.