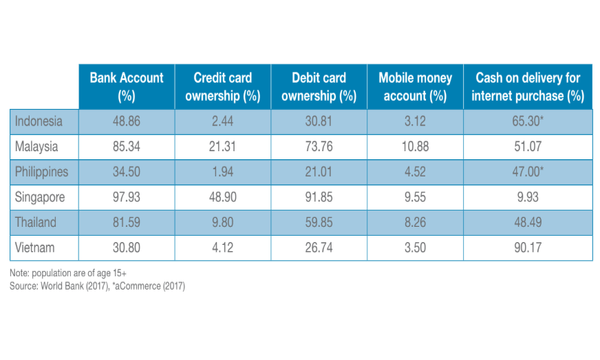 Is cash still king in ASEAN?

Card penetration for some countries fall below 50%, according to a study.

Cash still reigns supreme in ASEAN as 70% of transactions in Indonesia and the Philippines are still done through cold, hard cash, according to a report by Standard Chartered.

The report noted that whilst the penetration of bank accounts has shown improving numbers in some countries, card penetration is relatively low at below 50%. In most of the ASEAN countries, the preferred way to pay for online purchases is cash on delivery.

According to Stanchart’s report, reasons for high cash usage in the region in spite of the awareness of options for digital payments include the lack of understanding of how digital payments work, privacy concerns for their financial records, the perception that cash is still the simplest payment, and merchants, especially SMEs, that are still reluctant to absorb the costs of e-payments methods.

Aside from cash, cheques are also a go-to for transactions in most ASEAN countries, with usage remaining relatively stable in the Philippines and Thailand in the past five years. On the other hand, Indonesia’s cheque usage fell 32%.

StanChart noted that governments in Singapore and Malaysia have boosted efforts to reduce cheque usage in their effort to move towards a digital economy. For its part, Singapore aims to lower the use of cheques to 15% in 2020 and be cheque-free by 2025. Meanwhile, Malaysia targets to reduce its cheque volume to 100 million per year by 2020, which is half the usage in 2012.

“Markets like Indonesia are also trying to move away from cheque issuances. Bank Indonesia unveiled a direct debit feature in their national clearing system in 2016, and is in discussions to launch additional payment options to provide digital alternatives to cheque/bilyet giro,” the firm noted.