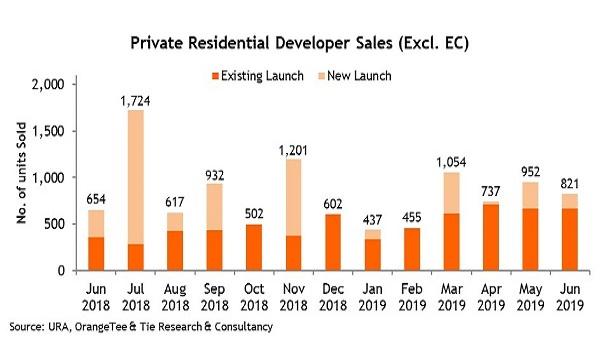 The Urban Redevelopment Authority’s (URA) developer survey revealed that sales jumped 25% YoY in June with 821 units sold. However on a MoM basis, sales dipped 13.8% due to school holidays and a lower number of newer projects launched, with a total of 670 units launched during the month.

One of the primary contributors to the growth was newly launched project Sky Everton, which sold 51.1% or 134 of its units in June at a median price of $2,523 psf. Christine Li, head of research for Cushman & Wakefield Singapore and Southeast Asia, noted that the launch was well received by the market given a combination of factors such as its attractive price tag, freehold tenure, location and the dearth of new launches in the area.

“It also helped when developers are more competitive in project pricing in order to keep the sales momentum going. Interest in the residential market has piqued at a time of market uncertainty amidst escalating trade tensions, as Singapore is viewed as a safe haven for both capital preservation and appreciation,” she said.

Along with Sky Everton, developments Lattice One, Seraya Residences and Sloane Residences also launched in June.

Meanwhile, Christine Sun, head of research and consultancy at OrangeTee & Tie also noted that the market has seen a surge in the number of new freehold condos (including those above 900 year leasehold tenures) being sold in May and June 2019. Citing URA Realis data, 250 non-landed new freehold units were sold in June, whilst 316 units were transacted in May.

“The highest number of new freehold condo sales last recorded was in September 2013, when 439 units were transacted. The uptrend is expected to continue as more freehold units will be launched in the coming months. It is rare to have a good selection of premium, freehold projects being launched at choice locations. This could be a good opportunity for buyers to snag a freehold property; otherwise they may have to wait for the next collective sales cycle that is likely to take place many years down the road,” she said.

Moving forward, many developers are expected to fast-track their launches ahead of the lunar seventh month. Some newly launched or upcoming launches include the 1,468-unit Parc Clematis, 820-unit EC Piermont Grand, 188-unit Haus on Handy, and 186-unit View at Kismis.