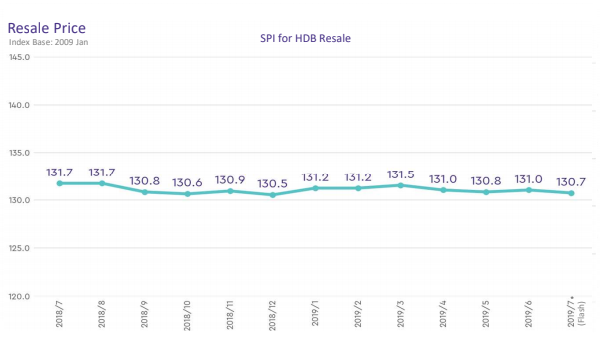 HDB resale prices down 0.2% in July

The new CPF rule has caused has dragged on the asking prices for older flats in mature estates.

HDB resale prices fell 0.2% in July from June, SRX Property Research revealed. On a YoY basis, prices were down 0.8%.

Prices of HDB Executives also rose 0.3%, whilst prices of three- and five-room flats fell by 0.9% and 0.1% respectively. On the other hand, four-room flat prices remained flat for the month.

Christine Sun, head of Research & Consultancy at OrangeTee & Tie, commented, “The price fall for flats in mature estates can be attributed to the higher proportion of older flats that may have dropped their asking price due to the increasing supply of newer flats that have reached Minimum Occupation Period (MOP) in non-mature estates. Shorter waiting time for BTO flats and ongoing supply from BTO launches have likely drawn some potential buyers away from the resale market.”

Sun noted that the demand for resale flats especially older units may have increased after the recent CPF rule changes that allow buyers to use more of their CPF savings as well as get bigger HDB loans for older flats, as long as the property's remaining lease covers the youngest buyer until the age of 95.

“We have also observed an increase in newer flats being put up for resale recently as many of these flats have reached their five-year MOP and are eligible for resale,” she said.

An estimated 680 flats will potentially enter the HDB resale market within the next three months, according to SRX data, as these units approach their respective five-year MOP.