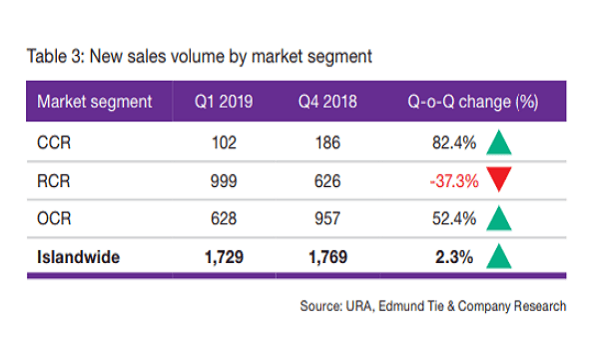 The Core Central Region recorded the largest increase in volume at 82% QoQ.

In the CCR, which includes main prime areas including the Central Business District (CBD), the number of units launched in Q1 2019 (337 units) more than doubled those launched in Q4 2018 (153 units), with sell-down rate of 14.3%. ET&Co noted that Boulevard 88, a freehold luxury project in prime District 10, was the best-performing project during the quarter, selling 26 of the 35 units launched in Q1 with prices ranging from $3,300 to $4,900 psf.

“Buyers in the OCR tend to be more price-sensitive, with Treasure at Tampines as the best-selling project that achieved 59% launched sell-down rate (i.e. selling 289 of 490 units launched) and unit prices ranging from $1,173 to $1,467 psf,” Saleha Yusoff, ET&Co’s executive director and regional head of research and consulting, explained.

The report further highlighted that demand for smaller studio to two-bedroom units continued to dominate the new sales market, accounting for 79% of total new sales, although this was down slightly from 80.7% in Q4 2018.

“As such, there was a slight uptick in demand for the larger units (three-bedroom and above), particularly for projects in the CCR,” Yusoff noted.

Despite the property curbs and higher new sales volume, 75% of new sale transactions were priced below $1.5m in Q1 2019, unchanged from Q4 2018 as Singapore citizens (SCs) continued to be price-conscious. ET&Co highlighted that there was a slight increase in units priced from $1.5m to $2m and greater than $3m, which was consistent with the small increase in demand for the larger three-bedroom and above units.

But with the property curbs imposing higher levies on Singapore permanent residents (SPRs) and non-permanent residents (NPRs), condo sales volumes for these two groups declined for the third consecutive quarter by 3.6% and 5.2% QoQ, respectively, in Q1 2019.

Also read: Chart of the Day: Property buyers from Taiwan and Korea grew in Q1

“The proportion of SPRs remained unchanged at around 16%, whilst NPRs decreased 1 percentage point (ppt) to 5% in Q1 2019,” Yusoff said.