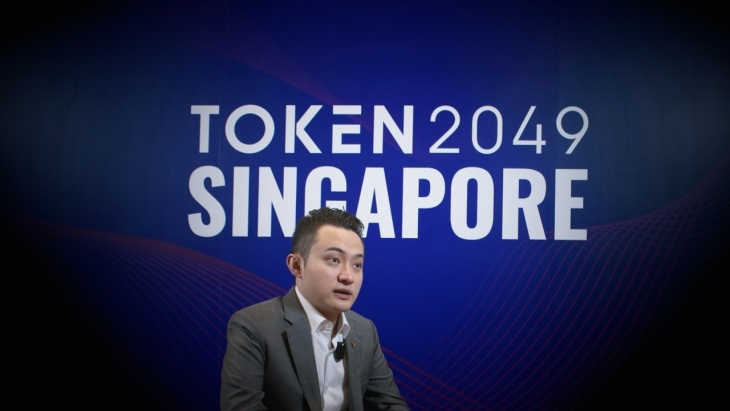 Justin Sun speaks to Singapore Business Review about working with the WTO and financial institutions at Token 2049 Singapore.

Traditional financial services have been moving to digital as customers shift to making wireless transactions — but is this shift enough to keep them stable in the changing market?

In an exclusive interview with Singapore Business Review, TRON founder and cryptocurrency entrepreneur Justin Sun said that integrating blockchain with traditional banking will be crucial in the industry’s growth.

Justin said that whilst there are known financial centres worldwide, such as London, New York, Singapore, and Hong Kong, which have built their standards to be sustainable for many years, most rural areas and developing states are not willing to spend money on building branches.

Comparing this with blockchain business, access can be from everywhere. This makes it a preferable option for customers in developing countries.

Justin explained that bringing blockchain forward will be beneficial, there are also several hurdles to get through first.

“I think going to mass adoption, we still have lots of things to do. We need a better user experience, or when you claim lots of regulatory hurdles, but I think eventually we will get there.”

Justin said he sees blockchain merging with exchange platforms in the future, as it provides a more powerful purchasing capacity for customers holding different currencies.

“I think blockchain will merge with the exchange business… Compared to competitors, the traditional financial institutions like banks and insurance companies, our space is still very small, I think around $1 trillion. The traditional finance industry is probably tens of hundreds of trillions of dollars. That's why I think this is more like a future as we move forward to become a mainstream financial institution,” he added.

Justin launched TRON, in 2018 and has since then become one of the largest public blockchain platforms in the world. In the same year, TRON acquired BitTorrent Inc., which had more than 170 million active users per month.

To date, TRON has more than 110 million users and up to 1,4000 decentralized chain applications.

On sustainability and climate change

Apart from being a business executive, Justin has been the Permanent Representative of Grenada to the World Trade Organization (WTO) since December 2021.

Whilst he pushes crypto and blockchain tech forward with his personal endeavours, Justin also takes part in wider issues such as tackling sustainability in trade and business.

Justin said that the WTO has been studying different states and the main commitment they have identified is that states are willing to commit to becoming carbon neutral. This, however, is not without its own challenges.

“In 2023, we will talk about sustainable development and global warming. This has been a very hot topic in the WTO for many years. Right now, the biggest hurdle or obstacle is that most of the world’s developing states find it hard to come up with an agenda because many of these developing countries still focus on getting everyone in their country to have a sustainable income. The priority continues to be economic development,” Justin said.

Amongst these include countries that have more urgent concerns, pushing their concerns on climate mitigation backwards and, in effect, back by years compared to developed countries.

“For example, China has committed to being carbon neutral in the next 10 to 20 years, but since they have about 1.4 billion people, for them to reach carbon neutral is a very big challenge. The same goes for India as well,” he added.