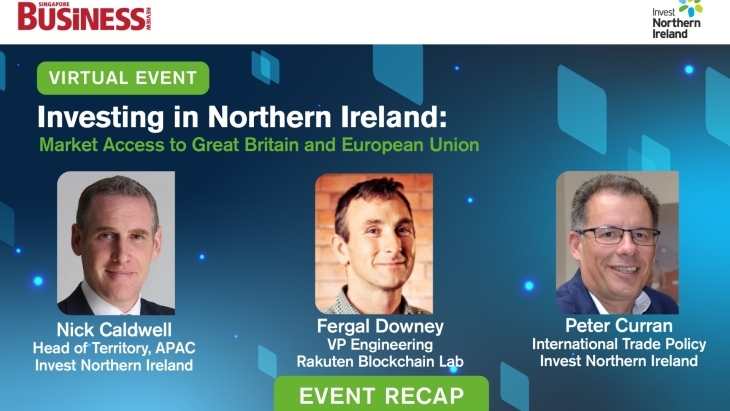 Invest Northern Ireland tells Singapore Business Review about the many benefits of being located in the region.

Global FDI, as projected by the UNCTAD, will likely remain weak in 2021; but Invest Northern Ireland has a more positive outlook, considering Northern Ireland is one of only two regions in the United Kingdom (UK) to attract more FDIs in 2020.

According to FDI Intelligence, investors announced 36 projects between January and November, an increase of 5.9% in 2019.

“Last year, we continued our success of attracting foreign direct investment into Northern Ireland; that was despite a bit of uncertainty around the European Union (EU) exit, but also because of COVID and the global pandemic,” Invest Northern Ireland’s (Invest NI) Head of Territory for Asia-Pacific Nick Caldwell said.

He was speaking at the "Investing in Northern Ireland: Market Access to UK and European Union" webinar, hosted by the Singapore Business Review with Invest NI.

According to Caldwell, talent, competitiveness, and location were the three key factors behind why Northern Ireland managed to remain as Europe’s leading FDI destination through the course of the pandemic and the UK’s exit from the EU.

Foreign investors set up shop in Northern Ireland because of its people — which he described as “agile” and “hungry for development” — and their competitiveness. Northern Ireland has a low unemployment rate of 3.1% between February and April 2021, compared to 4.7% recorded in the UK over the same period. This is also much lower than EU’s 8.1% unemployment rate in March.

Northern Ireland also has access to “great talent” and a “highly educated workforce,” Caldwell said, noting that a lot of their resources are invested in secondary and tertiary education, particularly in STEM subjects.

“This plays very, very well with our rich, deep engineering background; and today manifests itself into our software development,” Caldwell said.

“We have a very well-educated workforce and these subjects, and our education system is aligned to the companies that work in Northern Ireland.”

Finally, what makes Northern Ireland even more attractive to investors is its strategic location. The region has easy access to the rest of UK: England, Wales, and Scotland.

Being a part of the UK, Northern Ireland has the same tax structure, which has the second-lowest corporate tax rate in Europe. At present, companies in the UK are levied 19% corporate tax.

Caldwell also noted that it is more cost-effective for firms to invest in Northern Ireland against other key cities in Europe. He estimated that on average, it could cost about 60% of the cost of comparable places in other European cities, such as London or Dublin, or Paris amongst others.

“All in all, you've got access to great talent, a highly educated workforce, and at a competitive cost,” he said.

Invest NI, as an economic development agency, explores other markets, such as Asia, America, and Europe, to invite businesses to make investments in Northern Ireland.

Over the past decade, the Invest NI has supported 10,000 businesses, contributed £1.3 billion, or approximately S$2.4 billion, and delivered nearly £7 billion, or S$13.1 billion, worth of investments. On top of this, it has supported over 67,500 new jobs.

Aside from its competitive talents and lower cost, there’s more to Northern Ireland that businesses could consider – that is, dual market access.

This dual market access position means that Northern Ireland can become a gateway for the sale of goods to two of the world’s largest markets, according to Invest NI.

In terms of access to labor, whilst the free movement of people was disrupted, the UK and Ireland retained the Common Travel Area that provided for a degree of mobility of labor that allows Irish citizens to work in Northern Ireland. Workers outside Ireland, meanwhile, are also allowed under certain arrangements.

Further, Northern Ireland maintains regulatory alignment on goods with EU regulations. It also continues to use EU conformity markings to ensure goods are within EU’s standards.

The Case of Rakuten

Rakuten Blockchain Lab’s Vice President for Engineering Fergal Downey zeroed in on his experience in working with a technology team in the region, proving Caldwell’s claims about their “high-caliber” workforce.

Downey described the technology team as being driven to always challenge the status quo to ultimately make things better. He also said the team collaborates closely with other parts of the organization across the globe, all whilst still bringing their local identity.

“If you take a look at many of the multinational companies that establish a team here, you will see that very quickly, they establish a local identity, but within the backdrop of the larger organization,” Downey said.

He added that the tech teams in Northern Ireland are multi-disciplined that not only focus on building technical skills but also other essential skills required in delivering projects on a global scale.

In addition to this, Downey said Rakuten has also been collaborating closely with local universities. Over the years, they have delivered lectures to teach blockchain technology. They have also sponsored projects, hired graduates or interns.

“You have heard all of the support that you get from Invest NI, from the Rakuten perspective, we have availed financial growth programs. But we've also taken advantage of the non-financial support available category,” he said.