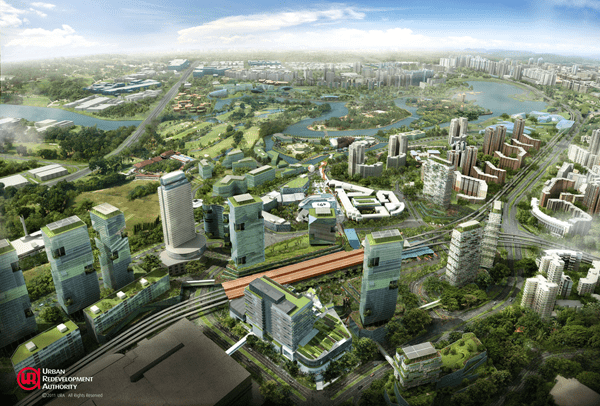 Heated demand for storage facilities is hit by the city's limited land supply.

With over 2.5 billion gigabytes of data generated every day, Singapore is making another case for punching above its weight as it zeroes in to capture the opportunity from data centres brought about by the world's growing connectivity.

Facebook's decision to invest $1.4b for its first Asian data centre in the city state is the latest high-profile example adding to the growing names of tech titans like Google, Alibaba Cloud and Yahoo who have found a supportive environment in Singapore with which to build large-scale storage facilities for their servers.

Hailed as the most robust Asian market in terms of business operations for data centres by Cushman & Wakefield where it ranks ahead of South Korea, Japan and Australia, Singapore's data centre capacity towers over its regional peers at around 370 megawatts (MW) of IT power supply amongst co-location operators.

To respond to the growing amount of data being generated and exchanged on a daily basis, the Lion City is expected to expand its data centre capacity by another 100 MW over the medium term as the government doubles down to implement its Smart Nation programme to the benefit of local data centre providers ilke Singtel, Keppel Data Centres and ST Telemedia.

Driving the heated demand for data centres is the e-commerce boom as well as the shift towards flexible working arrangements propelled by the likes of WeWork, NakedHub and Regus who are increasingly outsourcing for their growing data requirements, observed Boon Leong Tan, executive director and head of industrial services at Knight Frank Singapore.

“Companies that are used to have their own data rooms, now they will just outsource it to data centres," saidTan.

An outsourced or co-located data centre, as opposed to a captive one built for internal purposes, is a facility where businesses can rent the space and hosting services for their servers whilst the external provider answers to the security, power and cooling needs, according to market research firm Frost & Sullivan.

Although banking clients like DBS who contracted Amazon Web Services in 2016 are amongst those driving outsourcing activity, cloud operators have steadily assumed the top spot in the largest occupiers of data centres.

"Whilst the healthcare, banking and financial services sectors tend to treat data centres as a cost function, cloud operators view data centres as revenue-generating. Hence, the expansion of the cloud operators tends to be more aggressive compared to traditional data centre users, as businesses ramp up efforts to transition to cloud by 2020,” added Cushman & Wakefield.

Data drawbacks
Singapore's land shortage problem, however, poses a problem for its data centre dreams which could be the opportunity that emerging tech upstarts may need to move up the global rankings.

“One of the main operational concerns of building a data centre in Singapore has to do with availability of land. The scarcity of large land plots in Singapore means that it will be harder to build large data centres, which provide economies of scale, as seen in the US,” added Duncan.

Although Cushman & Wakefield expects data centre supply in Singapore to grow by as much as 18% by end-2018 with a strong pipeline that will go live in the next two years, cloud operators and data centre players eagerly snapping up limited land supply is poised to push up occupancy rates to 70% by the end of the year. Total data centre space has already hit 2.6 million square feet in 2017, according to data from Structure Research.

“[D]ata centre supply will have to catch up with demand as operators and cloud providers look at alternative options such as increased conversion of existing industrial buildings to data centres and redeveloping data centres which have been underutilised,” added Duncan.

High costs of building and maintaining data centres is also another factor to consider given the large capital investment needed to set up storage servers. Cushman & Wakefield notes that the construction of a new data centre can go for US$100m for a multi-tenanted facility to as much as US$1.5b for a cloud campus that can house several buildings in addition to required preventive and maintenance costs.

“Data centres require intensive capital investment from Day 1, largely due to the significant amount of M&E (mechanical and electrical)) equipment deployed. The majority of the M&E associated with data centres have a life span of 10 – 15 years so replacement costs have to be accounted for,” noted Duncan.

Along with the limited supply comes other requirements dictating locations where data centres can be legally built, added Knight Frank’s Tan. Under Singapore land laws, data centres may only be constructed under B2 zoning rules whereby business uses need to impose nuisance buffer more than 50 meters and within health and safety buffers - in addition, to the requirement of being far away from residential estates.

Other considerations in building a data centre, adds Tan, include the necessity for a reliable power supply and good connectivity. In the case of power supply failure, the industrial area must have a back-up mechanism that will enable it to resume operations almost immediately.

Despite the operational concerns of setting up and maintaining such spaces, there is no denying the booming role of data centre especially with the competitive environment fostered by startups, third-party providers, local players, cloud providers like Amazon, Microsoft and Google who are all racing to handle the wealth of data.

“Data centres are the backbone of the IT sector and remain crucial to the sector’s ongoing development. The sector is currently evolving at an unprecedented rate making any future predictions difficult, however, it is safe to say, that data centres will play a significant on-going role in an ever-changing industry,” added Duncan.