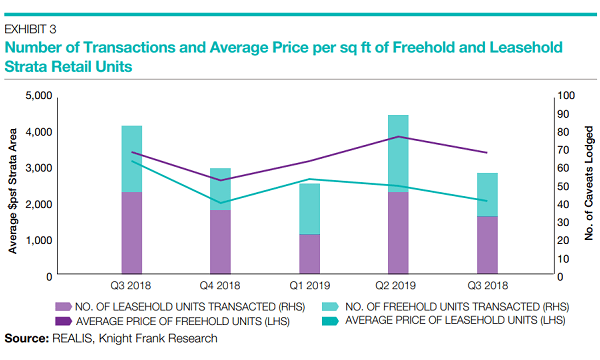 The sales value of strata-titled retail units dropped 55.3% QoQ to $64.3m in Q3 as leasing activity and investor sentiment worsened, according to a report from Knight Frank.

There were 46 caveats lodged in the same quarter, which is 36.1% QoQ lower as compared to the 72 caveats recorded in Q2. Amongst this figure, 26 caveats were lodged for freehold strata-titled units whilst 20 caveats lodged for leasehold units.

In addition, the number of caveats lodged for freehold and leasehold strata-titled retail units crashed 29.7% and 42.9% QoQ, respectively.

“The price of units with freehold tenure was more resistant to downward pressure than the price of the leasehold units,” said Mary Sai, executive director for investment & capital markets at Knight Frank. “More investors purchased freehold units as the value of the freehold units are not affected by lease expiry.”

Despite this decline, average prices of freehold strata-titled retail units are now 29.4% higher compared to its all-time low in Q4 2018. In contrast, prices of leasehold units are only 3% higher than the previous trough of the cycle Q4 last year.

Knight Frank also noted that investors have bought smaller freehold units in Q3.The average size of strata-titled retail units purchased in the period was 445 sqft, smaller than an average size of 614 sqft last quarter, and 697 sqft in Q3 2018.

“With smaller units, investors can limit capital outlay to a manageable quantum in times of economic uncertainty,” Sai added.

The largest retail property transacted in the quarter was the transfer of 313 @ Somerset. The retail complex was sold to Lendlease Global REIT for over $1b in preparation for its IPO in October. The price translated to S$3,478 psf, based on 288,277 psf net leasable area.