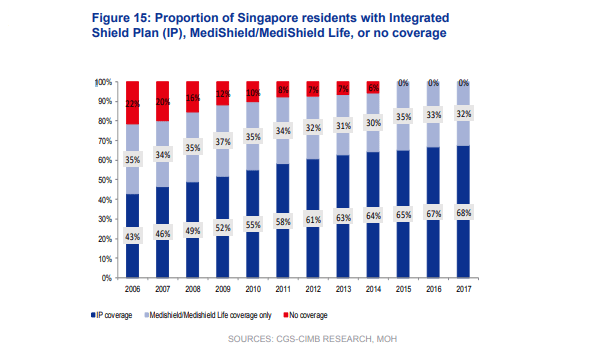 Chart of the Day: How much are Singaporeans covered by public health insurance?

Nearly 7 in 10 are already covered by the Integrated Shield plan in 2017.

This chart from CGS-CIMB with data from the Ministry of Health (MOH) shows that the public health insurance scheme has expanded its coverage to more Singaporeans from 2006-2017.

By 2017, 68% of Singaporeans are already covered by the Integrated Shield (IP) plan, a significant increase from the 43% in 2006. On the other hand, the proportion of those covered with Medishield and Medishield Life decreased slightly to 32% in 2017 from 35% in 2006.

“In Singapore, all citizens and permanent residents are covered by MediShield Life (whose premiums are heavily subsidised by the government) for basic medical coverage, and approximately two-thirds pay for an integrated shield plan (IP) from one of the seven private insurers: AIA, Aviva, AXA, Great Eastern, NTUC Income, Prudential and Raffles Insurance,” CGS-CIMB said, noting that such extensive insurance coverage have paved way for recent policy changes to focus instead on managing rising healthcare costs and escalating insurance premiums.

Singapore ranked only behind Hong Kong in the most efficient healthcare systems in the world, according to the Bloomberg Health Care Efficiency Index back in 2018.