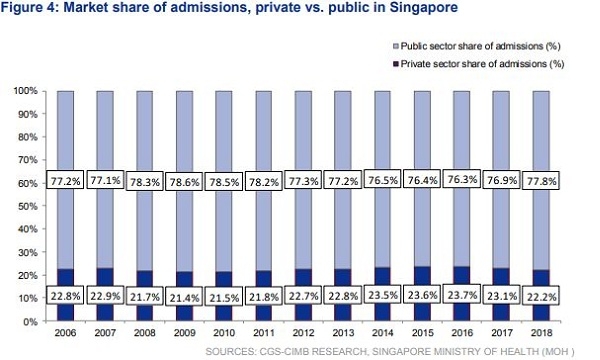 Chart of the Day: Public hospitals snapped up three-fourths of tertiary admissions in 2006-2018

Private players were left to fight over the remaining 22-23% of the market.

Like China, the tertiary healthcare market in Singapore is monopolised by public hospitals which snapped up 77.8% of admissions in 2018 and leaving private players with the remaining 22.2%, according to a report from CGS-CIMB.

Public hospitals have consistently represented over three fourths of admissions since 2006, according to the data.

However, this has resulted in overcrowding issues and drawn-out waiting times with a study from ValueChampion noting that admissions to general and specialty hospitals have surged 13.6% between 2015-2017 in response to the slight growth in total population over the same period. Average occupancy rates of Singapore public hospitals stand at 85% but usually peak to as much as 93% during weekdays, the firm added, citing Tan Tock Seng Hospital as having the longest waiting time at around 4.5 hours.

On the other hand, the CIMB report notes that private players dominate the primary care segment given the industry fragmentation in the city state.

Singapore's healthcare system has gained international recognition for its efficiency and coverage with all citizens and permanent residents enjoying coverage by MediShield Life for basic medical coverage, and approximately two-thirds pay for an integrated shield plan (IP) from one of the seven private insurers: AIA, Aviva, AXA, Great Eastern, NTUC Income, Prudential and Raffles Insurance.