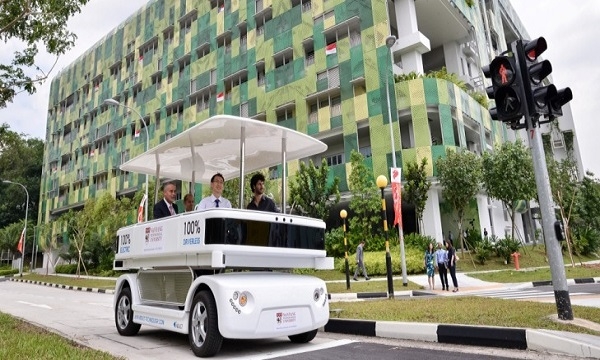 Singapore trails only behind Netherlands in readiness for driverless cars: KPMG

The Lion City’s test town for driverless vehicles is complete with traffic lights and a rain machine to recreate stormy tropical weather.

Singapore retained its second spot amongst 25 countries that have been actively rolling out initiatives in support of autonomous vehicles (AV), according to KPMG’s 2019 Autonomous Vehicles Readiness Index (AVRI).

The index, which assessed countries on 25 different variables such as policy and registration, found that Singapore government is positioning the country as a global centre for AV development with the deployment of a simulated urban test-bed and plans for driverless buses amidst a stellar showing in the policy and legislation, and consumer acceptance categories, although it fell short of Netherlands in terms of infrastructure.

“The government is very proactive in thinking about the future of mobility,” Satya Ramamurthy, KPMG’s partner and head of infrastructure, government and healthcare, said in the report. “It is seriously investigating the possibilities as well as preparing for a regulatory environment that will facilitate a future that is autonomous.”

The government is drawing on this facility in setting new road traffic rules, which are slated for publishing in early 2019, KPMG added in its report. Singapore shared top ratings in an assessment of its AV regulations with Australia, Finland and the Netherlands, and for having a single government entity for AV work with Hungary.

Additionally, the report noted that the areas of Punggol, Tengah and the Jurong Innovation District will use driverless buses and shuttles for off-peak and on-demand commuting from 2022, whilst working with the index’s first placer Netherlands on an international standard for AVs.

That being said, Singapore ranked relatively low on technology and innovation, placing 15th out of the 25 countries. However, Ramamurthy said that Singapore’s lack of conventional automotive manufacturing may prove to be a strength in developing electric vehicles (EVs) and AVs as they use a substantially different set of components.

Home appliances manufacturer Dyson recently announced it would open a new factory in Singapore to build electric cars in 2021, as well as move its corporate office to the Lion City.

Although the relatively low number of electric charging points is a weakness, Ramamurthy pointed out that electricity providers amongst others are planning to install more of these.

Energy utilities firm SP Group launched its first wave of 38 EV charging points islandwide on 9 January as part of its goal to build Singapore’s largest public EV charging network with 1,000 points by 2020. Similarly, BlueSG announced it would launch its charging network to third party vehicles progressively in Q1 2019 in its bid to push for the development of EVs.

Meanwhile, the report pointed out how Singapore taxes private cars heavily, which may provide a way to promote AVs, albeit at a cost.

“Effectively the pricing is done to discourage people from driving,” Ramamurthy explained. “That brings with it a whole set of opportunities. There is a lot of policy room for the government to do things to promote adoption, should it wish.”

Rounding off the top five countries prepared to adopt AVs were Norway, US and Sweden.