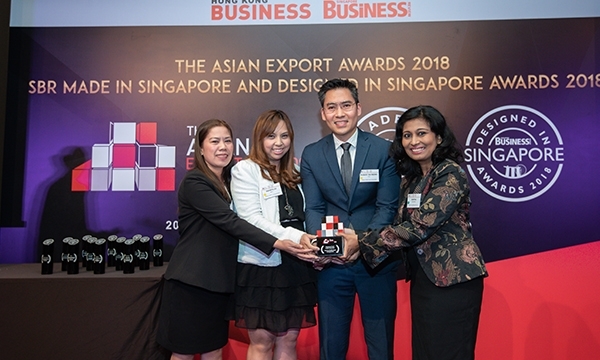 Century Tuna brand has established itself locally and internationally through advocating a healthy, fit and sexy lifestyle.

On its inaugural year, the Asian Export Awards lauds exceptional products and services that have remarkably enhanced a company's business in the regional export scene.
This pinnacle event for Asia's best exporters is open to two divisions—the large corporate for big companies with group turnover of over $300m and the local champion for small or medium-sized enterprises.

The Philippine-based food company has a dominant position in canned tuna with a market share of 83%, thanks to a combination of brands.

Meanwhile, its other well-known brand, 555 Tuna, holds a strong position next to their flagship product.

Due to its dominant share positions in the market, Century Pacific Food has set its sights on the World Market.

Using Century Tuna as the flagship product, the company follows a disciplined approach.

Since the brand is already rooted in the Philippine scene, it initially targets large Filipino communities abroad to establish a market base in each region. This is then leveraged to gradually expand the market to mainstream consumers in each country by joining food expos and calling on top accounts.

Century Tuna puts large tuna flakes in every can and gives customers a distinct savory flavor that will satisfy their palates. Because of these unique qualities in the company's canned tuna,
the product has gained acceptance from key markets in North America, Europe, across Asia Pacific as well as the Middle East, where it has become one of the top three supermarket brands. Additionally, it has also become a leader in China and Vietnam.

The expansive network of countries penetrated by Century Tuna provided the company a solid platform to roll out their other brands in canned meat, sardines and dairy.

However, regulatory restrictions prohibits the export of meat and milk products from the Philippines into North American, European and Australian markets. But these did not dampen the spirit of Century Pacific Food.

In spite of this, the firm continued marketing their brands in these key markets and through establishing manufacturing agreements with factories in the United States, Brazil the Netherlands and Australia, Century Pacific Food has built an encompassing supply chain network that manufactures products like Argentina corned beef, luncheon meat and hotdogs.

Due to its emergence in the international market, packaging for Century Tuna and Argentina canned meats have been translated into multiple languages, including Spanish, Italian, German, Dutch, Swedish, Hebrew, Arabic and Chinese to the cater to the growing number of loyal consumers worldwide.

At present, brands of Century Pacific Food Group are being sold and carried by top global retailers such as Walmart, Safeway, Carrefour, Metro and Giant.

It is present in as many as 60 countries across the globe—a proof that the company stands firm with its vision to nourish and delight everyone, everywhere, everyday.

The Asian Export Awards 2018, co-presented by Singapore Business Review and Hong Kong Business magazines, was held on November 20 at the Conrad Centennial Singapore.

If you would like to join the 2019 awards and be awarded as one of the most outstanding exporters in Asia, please email eleonor@charltonmediamail.com.