UBI (Universal Basic Income) in Singapore has its advantages and viabilities. In this post, we will look at the challenges in implementing UBI, and our conclusion - is UBI viable, or is it just a pipe dream?

One of the glaring issues is how it might give rise to new forms of exploitation, E.g.: "Give me a cut of your UBI each month or else" - and a new form of inequality could be created, mostly from violent communities with little police presence. UBI might also dampen the motivation to get into jobs.

Certain jobs which are already hard to fill, will get even harder to attract candidates. A cleaner making $1,500 per month would still get the $1,000/mth UBI payout, netting 2500 total. Hypothetically TWICE as rewarding to go to work than doing nothing. However this might still result in the pay for these jobs going up in order to motivate takers, the increased salary might inflate the prices of many services. Food will cost more. Maintenance will cost more. The impact of a UBI could actually be responsible for creating inflation. In 2003 the mexican government ran a study as a means to compare the deployment of "Programa de Apoyo Alimentario" (PAL). It compared giving rural villages a stipend of food, an equivalent cash amount, or nothing (As a control group) - the outcome was that in the villages that were given cash, prices went up by a mere 0.2%, so it is certainly a non-zero amount.

Detractors of UBI also cite that the root causes of the eventual wave of job losses caused by technological innovation cannot be solved with UBI as it would diminish the labour supply and also would be staggeringly expensive to finance.

The issue with any existing welfare system is always the question of 'who deserves it'. The notion of a family traipsing across the schlengen area, not contributing to the workforce for three generations continuously can give any European policymaker a cold sweat. It is however, not empirically proven that one generation's dependency on welfare payments influences the next generation to do the same.

If everyone was to receive a universal payment by default, who would work? Shouldn't some citizens get more while others get less? Should criminals be treated the same? What about undocumented immigrants? Would degrees of wealth and health matter? No- the premise of universal basic income is meant to be universal. It has to cover everyone to address gaps, not recreate another legacy welfare programme.

Foreseeably, we would have to look at SOME qualification. A reasonable criteria for a nationwide roll-out might be: citizens, permanent residents and everyone that can legally work in the country would automatically receive UBI. In the context of Singapore, that would mean our Bangladeshi guest workers won't be left out or live-in maids from Philippines or Indonesia for instance. The consequent effect of this, is that it will become VERY attractive to work in a jurisdiction with UBI if you come from a territory that doesn't practice the same.

Awarding a basic payment by MEANS-testing each and every citizen of a country is an onerous undertaking.

Centerlink - the Australian department responsible for disseminating social welfare payments has extensive eligibility criteria for different categories of applicants. Australia has a very comprehensive, respectful system. Even providing translators for non-english speakers, multiple modes of registration. However, the bureaucracy of administering the criteria does set back the Australian government quite a fair bit.

So, where has UBI worked? 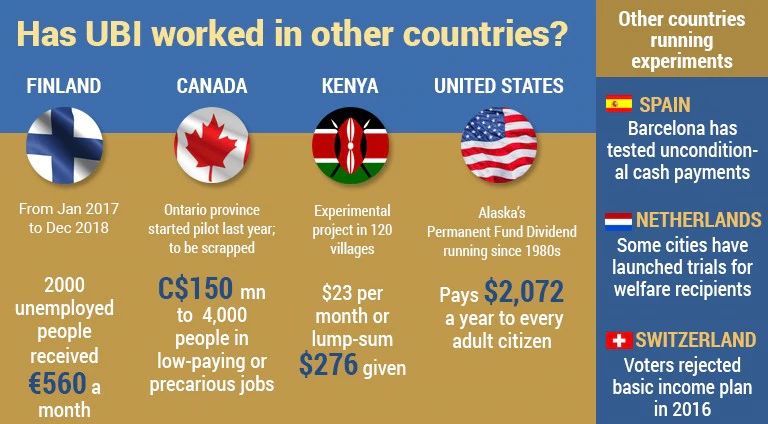 In 2010, the government of Iran ran a UBI trial, giving citizens transfers of 29% of the median income each month. Poverty and inequality were reduced, and there was no sign of large amounts of people leaving the labour market. In fact, people used it to invest in their businesses, encouraging the growth of small enterprises. Strangely, the same trial met much resistance at public and federal levels despite its apparent benefits to the labour force.

A UBI programme would have to be dispersed in cash form and not in vouchers or products in kind. The cash would be deposited directly into the bank accounts of every eligible recipient to prevent pilferage. It will have to be a regular payment, either as a monthly or fortnightly transaction - as an annual lump sum might encourage impulse spending.

Implementing a UBI nationwide would naturally cost more depending on the scale of the country involved and its population. Implementing UBI would also make legacy social welfare systems redundant, so the cost of implementation might be offset by the savings from administering old programmes.

Looking at the global situation, Universal Income is definitely going to be a hot topic in the months to come as the virus-led lockdown escalates economic destruction. Whether it will be an inefficient deployment of resources for governments to target the most vulnerable and prevent catastrophe remains to be seen. Perhaps a trial can be carried out in these trying times and with feedback, policymakers can adjust each iteration. A version of UBI could very well become a reality in our lifetime.

Mark Koh is the Secretary General of the Central and Eastern European Chamber of Commerce of Singapore (CEEC.org.sg). He is a former tech startup founder operating across Singapore, Indonesia and Thailand.