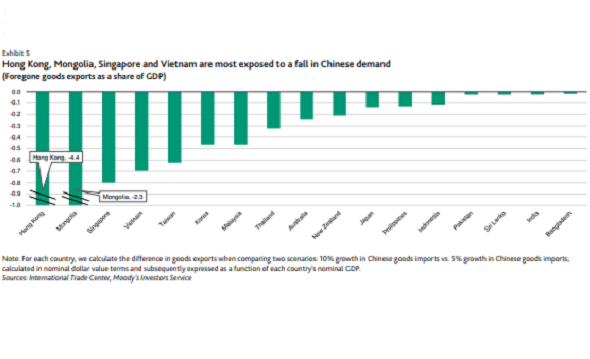 Singapore trails Hong Kong and Mongolia to rank third in Asia-Pacific countries that display the greatest exposure to a slowdown in Chinese demand, according to a report from Moody’s.

Singapore’s status as a key node in the manufacturing of intermediate products, especially electronics, render it particularly vulnerable to the protracted US-China trade dispute. Exports account for 173% of GDP in 2017 with exports to China accounting for 13.9%.

The city stands to lose as much as $22b to its 2019 GDP in the case of a full-blown trade war in which the US defaults on its trade obligations, pulls out of the North American Free Trade Agreement and imposes blanket trade tariffs on China, South Korea and Taiwan, according to an earlier interview.

“In addition to lower demand for its own domestically-produced goods, Singapore would also be exposed to a generalised downturn in China’s demand for commodities and goods sourced elsewhere in the region, such as those provided by Australia or Indonesia,” Christian de Guzman, Moody’s vice president and senior credit officer, said.

The manufacturing sector has been showing signs of weakness although other sectors that stand in the line of fire include the marine and shipping industries, oil & gas and banking.

Investment growth across APAC has slowed considerably in the second half of 2018 amidst a noticeable decline in private sector activity. In Q4, Singapore along with Taiwan saw softer private investment which was also observed in Korea which was hit by declines in facilities investment.

Singapore, however, can take steps to mitigate the slowdown in external demand with higher public spending given the city’s strong fiscal position. The city can expect an overall budget surplus of $2.1b in 2018 as the suspension of the high-speed rail project with Malaysia and stamp duty collections boosted the city’s fiscal position, finance minister Heng Swee Keat said in his February address. However, this is lower than the $10.86b in surplus in 2017.

“Overall, we expect the largest deceleration in real GDP growth in 2019 in Mongolia, Singapore, Korea, Vietnam and Hong Kong. These economies are amongst the most trade-oriented and most reliant on Chinese demand,” de Guzman added.

On the other hand, India, Cambodia and Bangladesh are less exposed to the slowdown that threatens the rest of their regional neighbours given their stronger reliance to trade outside APAC.