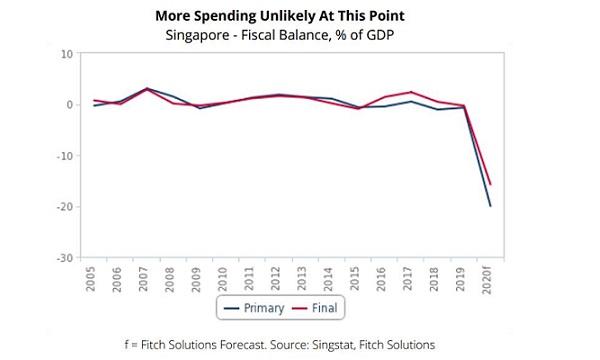 This comes after the announcement of the Fortitude Budget.

This chart from Fitch Solutions shows the fiscal deficit may further rise to cover 15.7% of GDP by the end-2020. This is a wider figure compared to its previous forecast of 9% of GDP.

Over the same period, the primary fiscal deficit is expected to hit 20% of GDP. This comes after rolling out the Fortitude Budget worth $33b bringing the total amount of stimulus spending allocated by the government to $97.9b.

However, Fitch notes that this one time expenditure is unlikely to compromise Singapore’s long term fiscal health. The budget will also reduce the extent of joblessness that would otherwise result from the economic shock.

Singapore is also deemed unlikely to add more stimulus spending when it is in the process if reopening its economy .Fitch notes that the Fortitude Budget includes a $13b contingency fund which should be sufficient for the rest of the year.