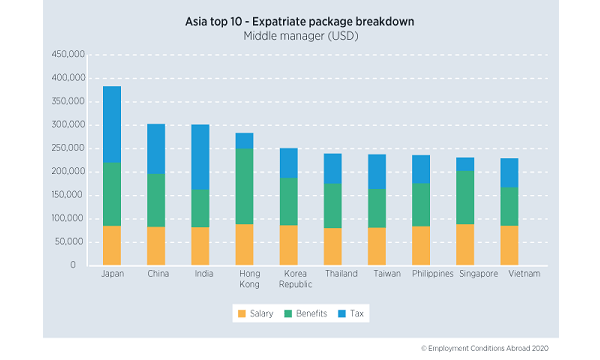 Cost of employing expats dropped over $5,200

Singapore's standing as one of the most expensive locations for hiring expats fell to ninth place.

But despite the fall in costs, the country remains amongst the most expensive locations in Asia for hiring expatriate staff, settling at the ninth spot. It lags behind Japan, China, India, Hong Kong, South Korea, Thailand, Taiwan and the Philippines.

When considering the cost of an expatriate pay package, ECA International encourages companies to factor in three main elements: the cash salary, benefits—such as accommodation, international schools, or cars— and tax.

“In recent years, Singapore has fallen to be the ninth most expensive location in Asia for employing expatriate staff. As a result, the cost of an expatriate pay package in the country is now lower than other Asian countries such as Taiwan and Thailand”, said.

“The gap between the cost of employing expatriates in Singapore as compared to Hong Kong has widened in the past year to 18%, representing a continuation of a long-term trend,” said Lee Quane, regional director – Asia at ECA International. “The key reason for Singapore’s more favourable ranking in terms of costs is lower taxes as compared to most of the other Asian locations in our rankings, and lower costs associated with benefits as compared to other high-cash salary locations such as Hong Kong.”

As such, Quane added that this helps moderate the fact that cash salaries earned by expats in Singapore are the second highest in the region, which is a cost that is only slightly lower than the average in Hong Kong.

“Hong Kong stood out against the global trend of decreasing costs of expatriate packages in 2019 and now represents one of the only locations in the rankings that saw all aspects of the package increase. Whilst this increase is seen to be positive as compared to the rest of Asia and even the world, the rate of increase was significantly lower than in previous years – coming in at 1.2%, Quane added.

He further noted that this was representative of the weakened global economy in 2019. Moreover,the average expatriate package in Hong Kong is unlikely to grow for the foreseeable future amidst the COVID-19 pandemic.

Meanwhile, China remains the third most expensive location in the world to employ expatriate workers, despite the overall cost of employing an expatriate in the country and their average salary dropping by over $8,212 (US$6,000) and $3,096 (US$2,262) respectively.

Given the above, Asia continues to be an expensive location to send expatriate workers in general, with 11 of the top 20 most expensive countries in ECA’s global rankings being Asian countries.