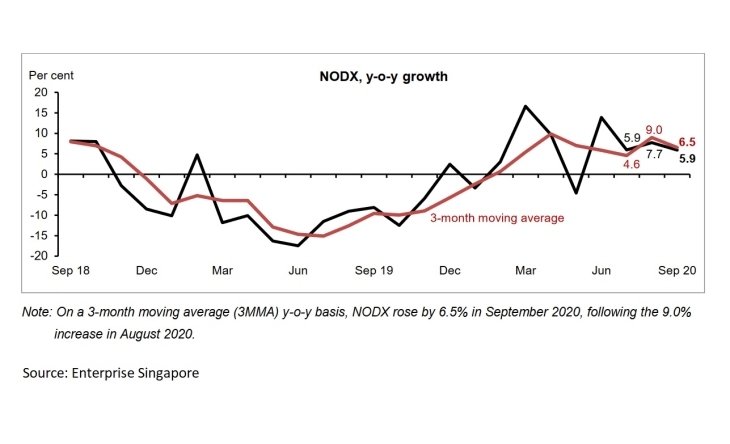 Last year’s low base of electronics pushed the gains.

Singapore’s non-oil domestic exports (NODX) grew by 5.9% YoY in September compared to a year earlier, extending the 7.7% YoY increase recorded in August, according to the latest data released by Enterprise Singapore.

This was mainly driven by the low base of electronics from September 2019 as well as growth of non-electronics.

Compared to August, however, NODX contracted by 11.3% to reverse the 10.5% expansion in the previous month. This was due to the decline in non-electronic exports outweighing the growth in electronics for the month of September.

Meanwhile, non-electronic NODX rose marginally by 1.8% YoY in September from a year ago, slowing from the 8.3% YoY growth in August. Non-monetary gold, specialized machinery and food preparations contributed the most to the growth, rising by 53.4%, 34.2%, and 30.7%, respectively.

On a yearly basis, total trade decreased by 1.9% during the month compared to September 2019, easing from the 7.8% in August. Total exports shrunk by 2.1%, narrowing from the previous month’s 4.8% decline. Total imports also fell 1.6%, following the 11% contraction in August.