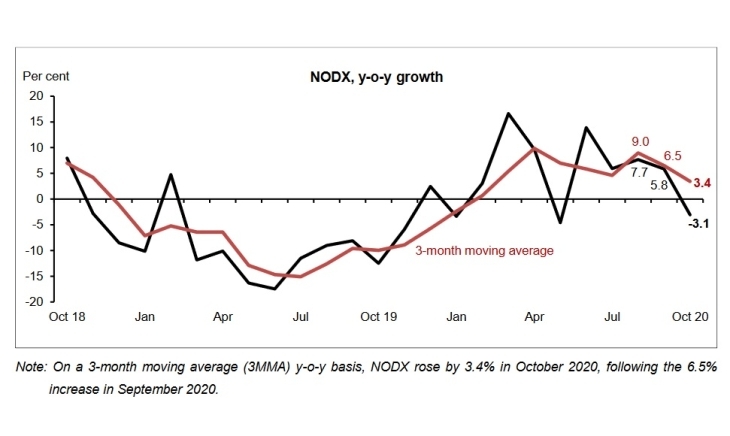 Singapore’s non-oil domestic exports (NODX) posted a 3.1% YoY decline in October compared to a year ago, following the 5.8% YoY increase in September, as both non-electronics and electronics recorded declines, reports Enterprise Singapore.

On a month-on-month basis, October’s NODX dropped 5.3% MoM compared to the previous month, extending—albeit at a slower pace—the 11.4% MoM contraction in September. The level of NODX reached $13.1b in October, lower than the $13.8b in September.

Electronic NODX fell by 0.4% YoY in October, a drop from the 21.4% YoY expansion recorded in September. Majorly contributing to this decline is that of ICs, other computer peripherals, and parts of PCs falling by 12.8%, 6.9%, and 1%, respectively.

Non-electronic NODX also fell by 3.9% YoY over the same period of comparison, reversing the 1.7% growth in September. This came after non-monetary gold plunged 61% YoY during the month. Petrochemicals (-15.3%) and miscellaneous manufactured articles (-37.3%) also contributed to the decline in non-electronic NODX.

Meanwhile, non-oil re-exports (NORX) rose by 2.5% in October 2020, extending the 5.1% growth in September. The slower growth was attributed to the expansion in electronics was being offset by a decline in non-electronics.

Compared to September, total trade fell 3.1% MoM and reached $77.2b in October compared to $79.9b in the previous month. Over the same period of comparison, total exports shrunk by 1.6% MoM whilst total imports slipped 5.2% MoM.

Per market, NODX as a whole declined in October, although exports to the US, China, Japan, and the EU 27 grew. Hong Kong, Malaysia, and Thailand were the largest contributors to the decline, falling by -21% YoY, 7.8% YoY, and 12.2% YoY, respectively.

NODX to emerging markets also contracted in October, falling by 12% YoY to extend the 14.4% decline in September. This was mainly due to the Middle East, the Caribbean, and CLMV dropping by 31% YoY, 38.2% YoY, and 10.7% YoY, respectively.