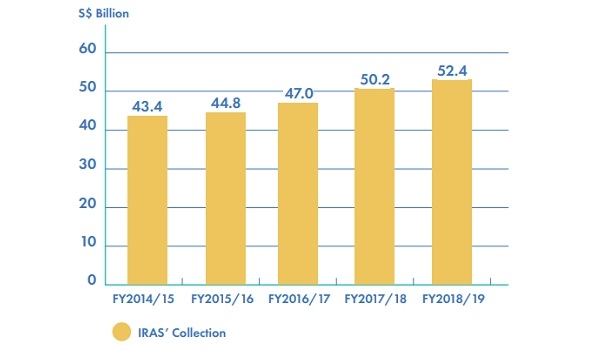 This represents 71.1% of the Singapore Government’s Operating Revenue and 10.6% of Gross Domestic Product (GDP).

Total income taxes (corporate income tax, individual income tax and withholding tax) amounted to $29.4b and made up 56% of IRAS’ collection during the fiscal year. This is 7.9% higher than the $27.2b collected in the previous year.

Corporate income tax made up 31% of tax revenue with $16.1b collected. IRAS noted that the amount rose on account of better corporate earnings.

Furthermore, individual income tax collection increased to $11.7b or 22% of the total revenue, attributed to the introduction of an overall relief cap of $80,000 per year of assessment (YA) in YA 2018, as well as the cessation of the one-off personal tax rebate given in YA 2017.

Meanwhile, in line with the growth in private consumption expenditure in 2018, goods and services tax (GST) collection inched up by 1.6% to $11.1b; whilst property tax collection amounted to $4.6b, 4.7% higher compared to the last fiscal year.

In contrast, stamp duty collection for the current year diminished by 6.1% to $4.6b due to lower number of private property transactions. Betting taxes, which comprise betting duty, casino tax and private lotteries duty, dipped 0.9% to $2.7b during the year.

Also read: Singapore earned $1.3b from casino entrance fees since 2010

IRAS also stated that $389m were recovered in taxes and penalties from 10,301 cases that they audited and investigated during the year.

Current year tax arrears--or taxes due to the government, but not paid-- for income tax, goods and services tax, and property tax remained low at $373m or 0.87% of net tax assessed.

IRAS also shared that nine out of 10 individuals, and eight out of 10 companies, filed their taxes on time.

Meanwhile, the cost of tax collection amounted to $0.008 for every dollar collected, down 4.76% from last year's $0.0084, and the lowest in the last five fiscal years. This was attributed mainly to a 1.5% decrease in service and lease expenses.