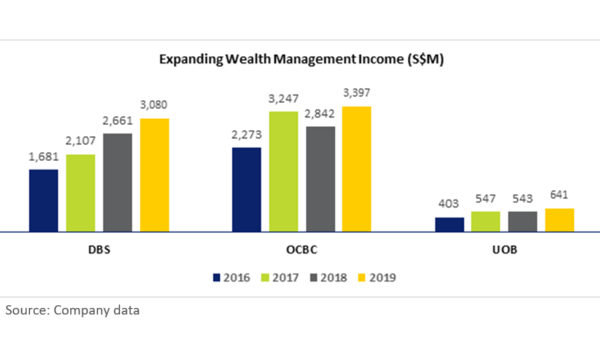 Wealth made up 31% of OCBC and UOB’s total income.

Singapore is rapidly becoming a leading choice amongst the world’s ultrarich to park their money, with its big three banks expanding their average wealth management income by 18% YoY in FY2019, a report by SGX revealed.

Meanwhile, OCBC’s wealth management income represented almost a third (31%) of the bank’s total income for FY2019, with the value expanding 20% YoY to $3.4b.

These figures are in-line with the results of a survey by Asian Private Banker, which posits that Singapore is expected to attract offshore wealth at a compound annual growth rate (CAGR) of 8% through 2021. This is twice the pace of expansion expected for Switzerland over the same period.

The number of family offices in Singapore has also quadrupled from 2016 to 2018 on the back of increasing Asian wealth, as more families consolidate their wealth in Singapore through formal structures, according to SGX.

“Singapore has established itself as a leading private banking and wealth management centre, both globally and in Asia. It has breadth and depth of institutions that give HNWIs access to global and regional financial markets, as well as a full suite of wealth management services,” the SGX report noted.

OCBC, DBS, and UOB now have a combined market value of more than $150b and account for about 20% of daily stock market turnover.