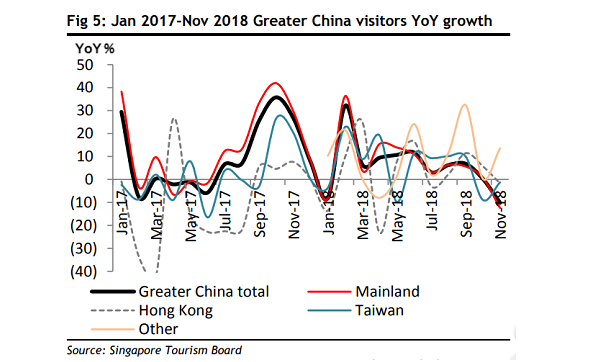 The decilne in tourist arrivals in November broke ten months of growth.

The sudden year-end drop in Chinese tourists weighed on the performance of Singapore's aviation services-related stocks in Q4, according to Maybank Kim Eng.

The number of visitors from China dropped by around 10% YoY in November after recording growth in the first ten months of 2018 as the impact of a slowing economy, weaker RMB and declining consumer confidence manifested in sluggish tourism figures, according to Neel Sinha, analyst at Maybank Kim Eng.

Greater China currently accounts for roughly 24% of inbound tourists to Singapore with mainland visitors making up 19%. IATA forecasts that China will be the fastest growing aviation market over the next twenty years to add around 1b passengers with a CAGR of 5%.

Also read: 2 in 10 tourist arrivals in August were from China

Despite the monthly decline in Chinese vistors, Sinha waved off concerns of downside risks to Singapore's aviation sector as monthly arrivals are often 'noisy' due to changing timing of holiday periods and differing travel promotional drives. "Whilst this is possibly a near-term headwind, we argue that market concerns are somewhat overblown, and we remain bullish on the sector for the secular longer-term trends of global fleet and regional passenger and cargo traffic growth," he said.

Moreover, Chinese inbound arrivals hold a more significant potential in the long term as passport penetration is estimated at a low 9%.