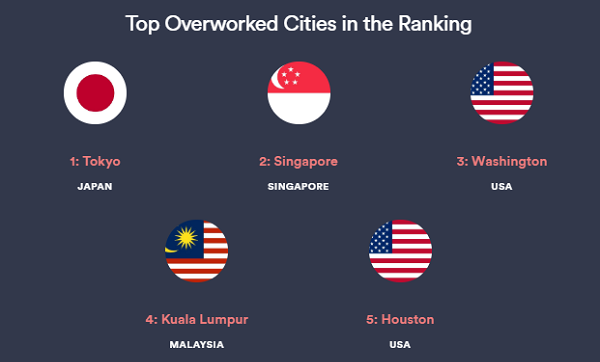 Here's why Singapore is the world's second most overworked city

Employees' number of actual work hours is 23% higher than the mandated 48 hours per week.

Singapore just trails Tokyo, Japan as the most overworked city in the world with on average 44.6 work hours per week, a report by IoT company Kisi revealed.

Singapore had a total score of 36.36 points on the 2019 Work-Life Balance Index, significantly lower than the leader Helsinki, Finland which got a score of 100 points. Forty cities were evaluated based on work intensity, society and institutions, and city livability.

The Lion City had the second highest score in work intensity. The report found that on average, Singaporean employees arrive to work at 9:34 a.m., take 14 vacations a year, commute one-way for 44.5 minutes, and have their number of actual work hours 23% higher than the mandated 48 hours per week.

In terms of liveability, Singapore had the 10th best score at 94 points. Its city stress score of 42.5 is the 17th best in the index.

In terms of Singapore’s society and institutions score, it had the fourth best score in the index at 70.5. It had a healthcare score of 77.8, whilst it ranked 24th in terms of access to mental health facilities. However, Singapore had the 2nd lowest score in terms of LGBT+ equality.

As Singapore’s workforce skews towards a millennial demographic, job seekers are not only requesting flexible perks but also expecting them to be included in remuneration packages, according to Matthieu Imbert-Bouchard, managing director of Robert Half. “This has placed pressure on companies to evolve their programs to incorporate greater work-life balance initiatives which we may see trickle down into a less strenuous ‘work intensity’ rating over time,” he said.