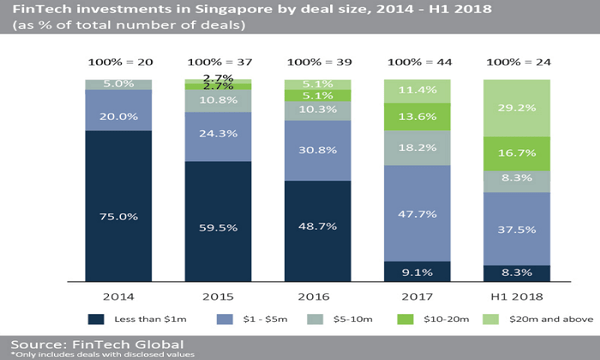 Chart of the Day: Late-stage capital rounds snap 45.8% of fintech funding in H1

This bucks the trend that startups are only receiving seed funding.

Later-stage deals have been accounting for a greater part of Singapore fintech funding in the past four years with capital injections worth more than $5m snapping up 43.2% of total fintech funding in 2017, according to Fintech Global.

"There was an absence of deals valued above $10m in 2014. However, this category’s share subsequently increased year-on-year; in 2017, a quarter of all deals were larger than $10m. This trend continued in H1 2018 with 45.8% of investments in this range," Fintech Global added.

A notable deal in this category was the $30m investment by Makara Capital in tryb Group, which acquires and develops middle market FinTech companies.

The growing investor inclination towards later-stage funding bucks the seed funding rut commonly plaguing homegrown startups who are able to access capital within the US$50,000 to US$2m range that covers initial rounds but are unable to unlock further capital within the US$3m range to grow their products and expand into other markets.