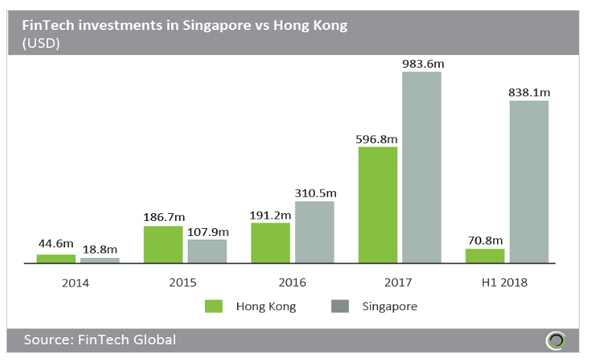 Chart of the Day: Singapore nabbed Asia's fintech crown from Hong Kong in 2017

Singapore has overthrown Hong Kong as Asia's top fintech hub after total fintech funding in the Lion City was 1.6 times higher than in Hong Kong in 2016 and 2017, according to a report from FinTech Global.

And Singapore is well-placed to maintain its lead for the year ahead after fintech funding from 34 deals in the first half of the year has ballooned to over 10 times that of Hong Kong (US$838.1m versus US$70.8m) which is largely thanks to Singapore's simpler regulatory frameworks.

"Singapore takes a simpler regulatory approach to FinTech than Hong Kong which has a multi-layered regulatory structure. As a result, Singapore may be more attractive to FinTech companies trying to avoid the red tape associated with multiple regulators," Fintech Global said in its report.