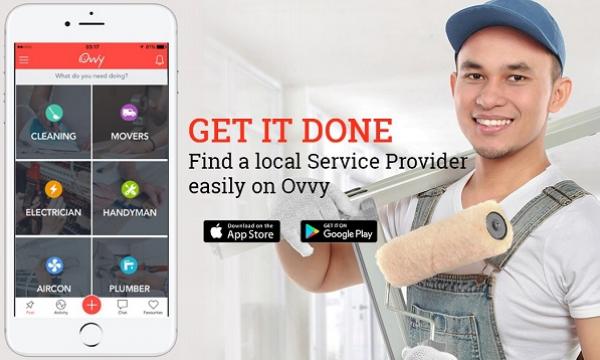 The proceeds will be used to enhance its product and grow the team.

When former professional football player, Thomas Beattie, came to Singapore, he often found himself connecting his expat friends who were in need of plumbing and handyman services to vendors he knew around the area. After observing significant market demand and no homegrown solution, Beattie tied up with fashion designer and entrepreneur, Mia Gigandet, to launch Ovvy, a domestic service marketplace that aims to execute what he was once doing manually.

Since its launch in June 2018, Ovvy has generated over $100,000 in revenue by connecting users in need of painting, plumbing, electrical work, handyman, aircon maintenance, cleaning and moving services with vendors on its mobile platform. In May 2019, the startup raised $600,000 in a seed funding round led by angel investor Rapzo Capital as it aims to expand the offerings of its domestic service marketplace and penetrate the B2B space.

“You’re never going to have a lack of people needing things doing. On the other hand, we felt there was a lot of talent and skills within the service provider sector,” Beattie told Singapore Business Review. “[Ovvy] was trying to link up those two demographics in Singapore which we felt didn’t really connect and wasn’t really executed efficiently.”

Unlike similar apps that automatically assign a service provider to a customer, users have the freedom to pick from an extensive list of vendors vetted by a TripAdvisor-like review system. Through its integration with Facebook, users can browse reviews posted by friends or family members. “We wanted the customer to have the freedom to choose who comes to their home, who fulfils that job and who’s the right person for them,” he added.

The mobile app also features a rewards system that dole out points to service providers for carrying out quality work which can then be redeemed for cash. Customers can also unlock Ovvy points for credit that can then be used on the platform for subsequent transactions.

With Ovvy, consumers do not pay vendors directly as payments are transferred into an escrow account and funds are only released when the job is marked as complete. However, the monetisation opportunity in the B2C space is minimal as the app takes only 10% surcharge from each transaction, according to Beattie, who seeks to achieve the next stage of growth for Ovvy in the B2B segment. “We don’t really use the B2C platform as a way to monetise. For us, its really a way to create value and validate the product in the market and allow us to identify the best service providers in each subcategory,” he said.

In the next few months, Beattie unveils plans to launch a B2B platform that incorporates the best service providers on the consumer platform and will be re-sold to companies on a monthly subscription basis. The team plans to use the proceeds of the funding round to enhance marketing efforts, launch the B2B product, add more categories to the B2C platform such as pet sitting and pest control and grow the team. As part of its longer term plans, Beattie unveils plans to gradually expand to the SME segment which will require services ilke graphic designers, social media content creators and web developers.

“The plan for us is to expand the product over the next year as opposed to expand in the region. Sometimes, people can get a little bit caught up…to expand too quickly,” Beattie said. “Whereas we really want to capitalise on Singapore in the best way we can.”