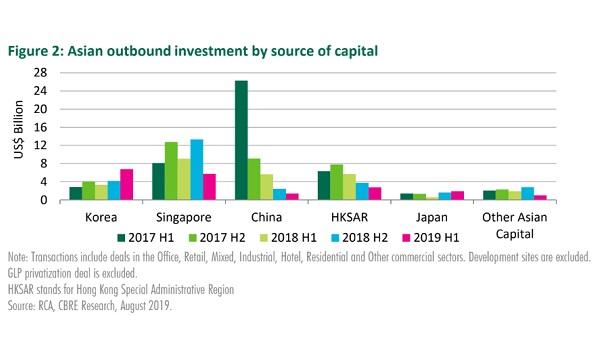 The decline could be seasonal as investors are typically more active in H2.

South Korea clinched the top spot after their investors chalked up $9.44b worth of overseas transactions in the first half of the year.

Singapore’s H1 capital flows also declined 50% compared to H2 2018, although CBRE noted that this could be seasonal since Singapore-based investors are reportedly more active in the second half of the year – a trend observed since 2013.

"Whilst investors from Singapore have been active in overseas investments in 2017 and 2018, the looming global economic uncertainties may have moderated their pace in general. Nonetheless, Singapore-based buyers became more active within Asia, accounting for 43% of transaction volume in the region in the first half of the year,” said Hugh Menck, executive director of Capital Markets for CBRE Singapore.

Menck noted that Singapore-based investors have become more active in China in the past 12 months, attracted by weak domestic competition and a market size promising long-term growth. More Singapore developers have made acquisitions in China’s Tier 1 cities.

The report also highlighted the continued strong demand from Singapore-based buyers seeking opportunities in mature economies, particularly cities in the US and Western Europe, and also Ireland and Poland.

“Singapore-based investors [focus on] acquisition strategies focused primarily on structural opportunities such as logistics properties as well as defensive assets such as offices. There are also buyers who are adding multi-family assets to their portfolios,” the release read.

“An emerging trend amongst Singapore-based investors is the pursuit of higher yields and alternative investments, including student accommodation and data centres,” it added.

In total, Asian outbound commercial real estate investment declined 25% YoY to $26.38b (US$19b) in H1 2019 weighed down by the rebalancing of portfolios by mainland Chinese investors and global economic uncertainties. Despite a moderation in global capital market flows, the momentum in Asian outbound capital flows is being spurred by new sources of capital looking for diversification, a low interest-rate environment, historically low yields and increasing popularity in new destinations, reported CBRE.

Mainland Chinese investors have reportedly disposed of assets in key overseas markets including London, New York and Vancouver – albeit at a significant profit – during the period. This, along with existing capital controls, is likely to perpetuate the trend of net disposal by mainland Chinese investors, CBRE noted. Purchasing is expected to be led by SWFs and corporates acquiring assets for self-use.

Meanwhile, Japanese investors are reemerging as a key source of capital in Asian outbound flows in H1. Since the adoption of a real estate mandate by the state pension fund and subsequent foray into alternative investments, the volume of outbound investment activity by Japanese buyers increased for the third consecutive half yearly period to $2.64b (US$1.9b) in H1 2019.

Furthermore, CBRE said that Asian investors can still capture alpha returns through a defensive, blended portfolio which combines both direct and indirect investments in core properties.