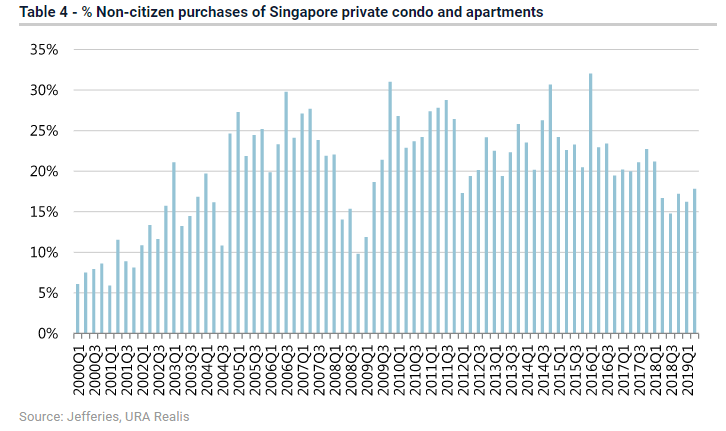 Chart of the Day: Foreigners snapped up 18% of total apartment purchases in Q2

There was a surge of demand from China, Hong Kong, and Taiwan.

The purchases of uncompleted apartments by foreigners accounted for 18% of the total number of transactions in Q2, up 10% YoY or 40% QoQ to 410 units, according to data from Jefferies Equity Research.

The report noted that this was the highest share of non-locals in purchases for uncompleted apartments since Q2 2018.

In H1, the share of non-Singaporean private property purchases rose to 22% YoY. Jefferies also mentioned that there is a surge of demand from overseas buyers during the quarter, particularly from Hong Kong and China. Buyers from the two markets, along with Taiwan, makes up 11% of the total recorded transactions.

Typical demand profile of transactions ranges between $1.5-3m. Interest was concentrated across central area projects such as Boulevard 88 and One Pearl Bank. Agents also commented that the projects of developers with presence in Hong Kong such as Artra, Margaret Ville, Parc Esta, Stirling Residences were preferred by Chinese buyers.

For mid-August, foreign purchases accounted for 5% of the total uncompleted apartment transactions, as compared to 22% for H1, thanks to higher number of purchases from locals. Jeffries noted that these prospects are back to buying city or city-fringe units in Singapore.