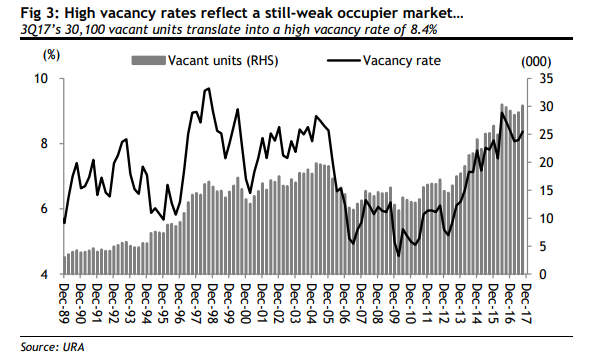 Residential prices are still under pressure.

This chart from Maybank Kim Eng shows the rise in Singapore's vacancy rate to 8.4% still puts residential rents under pressure.

However, if vacancy rates do improve, rents could start to recover.

During the previous en bloc cycle of 2005, vacancy rates fell from 8.4% at end-2005 to 6.5% by mid-2006 as households displaced in the en bloc process sought out new homes. A corresponding 3% uptick in rents then sparked the start of an upcycle.

Maybank Kim Eng analyst Derrick Heng commented, "We think an improving economy and accelerated demolitions from the current en bloc fever could provide further upside to rents in the next two years."