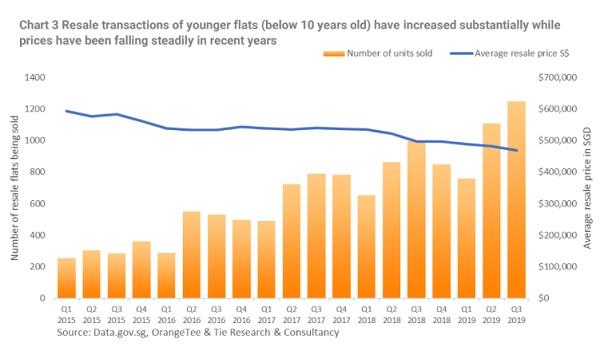 Depreciation for resales of old and new HDB flats slowed down in Q3: report

The price weakness in younger flats were attributed to a rise in resale transactions. According to government data, the number of younger flats sold in Q3 2019 rose 12.4% to 1,247 units in Q3, the highest transacted in a single quarter since Q3 2010.

“The data may indicate that more families could be ‘cashing out’ on their flats earlier to upgrade to private property or a bigger HDB flat. Some owners may have sold their flats early for fear that the value of their flats would fall with age,” OrangeTee wrote.

The number of younger flat transactions is expected to grow in the upcoming months, as more flats reach their minimum occupation period.

Based on government data, prices of HDB flat resales edged up 0.1% MoM in Q3. Transaction volumes dipped 0.2% to 6,264 units over the same period.

“Against a backdrop of growing economic uncertainties, the recent policy changes could be the positive catalysts behind the price growth of many HDB resale flats. The changes had likely spurred demand and instilled greater market confidence,” OrangeTee wrote.