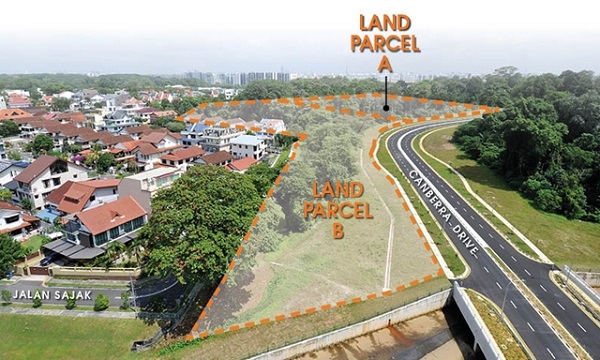 The adjacent parcels could yield about 675 units.

The Urban Redevelopment Authority (URA) has put two residential sites at Canberra Drive for sale by public tender under the Government Land Sales (GLS) programme, according to a media release.

“While Parcel B is larger and odd-shaped, with an elongated thin tail, the developer can build single loading units which offer unblocked views over the low-rise landed housing. A larger site also has potentially better economies of scale and can offer more facilities,” she said.

The tender for the two sites will close on 3 March 2020, which will be batched with an executive condominium site at Fernvale Lane to be put for sale in December under the programme.

“Splitting the large plot into two smaller sites would make them more palatable and attractive to a wider range of developers. However, it would be interesting to see how the two tenders pan out seeing that both sites are launched for sale at the same time,” Song commented, noting if developers could likely bid for both parcels to better defend prices.