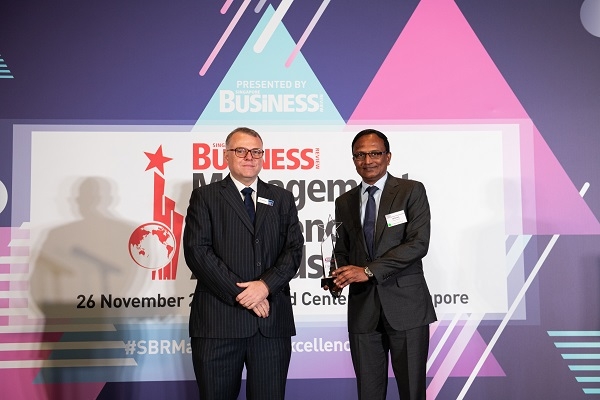 Back on its second year, Singapore Business Review honours the country’s most outstanding business leaders, including trailblazing teams and individuals whose initiatives have resulted in substantial business gains for their company’s operations or expansion of the company’s target markets.

When Senthil was still with the Institute of Materials Research and Engineering of the Agency for Science, Technology & Research (A*STAR), he developed a platform technology inclusive of flexible Ultra High barrier films, Device Encapsulation, Nano Sealing Material and high throughput manufacturing processes. Subsequently, he spun-off the technology from A*STAR to start Tera-Barrier Films.

His breakthrough was a protective film which creates the highest performance barrier to moisture and oxygen. He resolved the pore effect through plugging the defects in barrier oxide layer with nanoparticles.

This novel barrier film technology has proven to be useful for flexible electronics, displays, and organic solar and medical devices, since they are extremely sensitive to oxygen and moisture. Additionally, he was also able to produce a highly sensitive permeation measurement system for characterizing barrier films.

Senthil’s barrier stack, which consists of one aluminum oxide barrier layer and one Nano Sealing Layer cuts costs and shows results that are 1,000 times better, compared to competing multilayer technologies. His innovation has also reduced the necessary number of barrier layers in the barrier stack. Competitors’ barrier films have not been able to measure up to the performance and price point of Senthil’s barrier films.

Recently, Senthil also invented a single stretchable Nano Sealing Layer that is 50 times better than regular transparent barrier oxide layers or multilayer barrier plastic films which are used in food and medical packaging. This invention enabled TBF to expand and enter into the food and medical packaging field, where the requirements for packaging applications are significantly different compared to electronic devices.

Validated by celebrated companies in food and medical packaging, this stretchable Nano Sealing Layer is considered to be the top alternative for aluminum barriers in food and medical application. The recent venture promises staggering growth potential for TBF as the field itself is an existing market of several billion dollars.

His technology attracted investments from leading companies such as KISCO, 3M, New Chemical Trading and other multinational companies.

Senthil has been working in the field of vacuum engineering, Research and Development and thin films coatings for nearly 30 years and has a strong patent portfolio in barrier technology for flexible displays, flexible solar cells, flexible lighting and food and medical packaging applications. He has filed 103 patents globally, with 70 of these patents already having been granted.

The Chief Technology Officer has also garnered several awards for his barrier films. His invention was included in the Scientist & Entrepreneur Award (A*STAR). Frost and Sullivan gave him the Next Generation Technology Award, and AIMCAL - KRICT recognised his research with the Best Paper Award.

The Singapore Business Review Management Excellence Awards was held on 26 November 2019 at the Conrad Centennial Singapore. Some of the previous winners include OCBC Bank, BreadTalk Group, AIA and Great Eastern Life Assurance.

If you would like to join the 2020 awards and be awarded as one of the most outstanding management executives of Singapore, please email julie@charltonmediamail.com