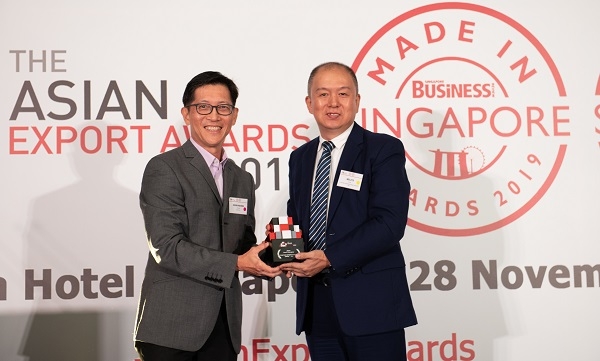 The company recreated the packaging as part of its rebranding strategy.

On its second year, the awards event lauds exceptional products and services that have remarkably enhanced a company's business in the regional export scene.

This pinnacle event for Asia's best exporters is open to two divisions—the large corporate for big companies with group turnover of over $300 million and the local champion for small or medium-sized enterprises.

YanYan International’s Wackie Corn Chips has been gaining ground since its release in 2017, with consumers hoarding packs almost as soon as merchandisers place them in supermarkets and other stores, the company said.

“According to the feedback we have gotten from our market research, first-time customers who see Wackie on the shelves assume that they have been manufactured overseas. Wackie’s long, soft cover immediately calls out to you, as if wanting to be plucked off, and its dark sheen speaks of class and quality. This brand is made to belong—to the hungry customer who wants to feel special while they are enjoying their snacks,” Melito Chua, President, said in a statement.

From pillow packs, the company innovated Wackie’s packaging into stand-up pouches to look more premium, special, and top-of-the-line. The company intended this to resonate to almost every individual, whether you’re a millennial professional making your mark in your own industry, a parent who’s juggling duties at work and at home, or a young teenager who’s beginning to discover the beauty of the world around you.

As consumers from different generations become more discerning and picky with their choices, Yan Yan International said that authenticity, integrity, and worthwhile R&D make their products a premium.

“The consumer market of today, especially the millennials and zentennials, want a brand that they can trust; at the same time, their parents and their older siblings want value for their hard-earned money,” Chua added.

Catering to the new tastes of consumers not only domestically but also in the global market, the company expanded Wackie Corn Chips into six variants: Original, BBQ, Cheese, Wasabi, Spicy Turkey and Salted Egg.

Aside from the easy-to-carry packaging and flavour variety, the company attributes the rising customer demand to Wackie Corn Chips’ affordability, as well as the company’s proactive approach in engaging global and regional markets.

During a recent international food show in Taiwan, Yan Yan International joined a delegation of Philippine food companies to further promote their products to the international mainstream markets,

“Wackie Corn Chips has been going strong and has been exported to many countries. It is a snack food at its best—cost-effective, delicious, and of international calibre in every sense of the word. You can let your hair down and enjoy yourself, be as ‘wacky’ as you’d like to be,” added Chua.

YanYan International produces more than 300 products from its six manufacturing plants and exports to Canada, US, Pacific Islands, Australia, and Southeast Asia that includes Brunei, Korea, China and Taiwan as its biggest market.

The company is reportedly setting its sight in the Middle East for expansion and soon, Europe starting with Norway market.