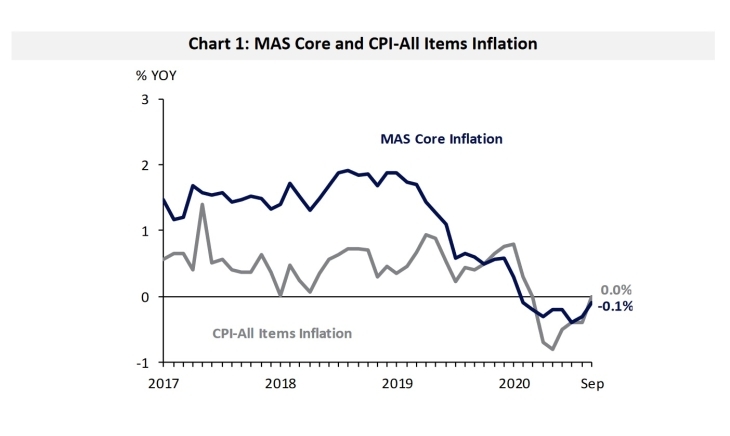 MAS core inflation slows to a 0.1% decline in September

Meanwhile, the MAS core inflation improved to a -0.1% decline in September from a -0.3% decrease in the month previously, according to the latest data from the Monetary Authority of Singapore (MAS) and the Ministry of Trade and Industry (MTI).

This was mainly driven by smaller reductions in the cost of services and electricity & gas.

The MAS core inflation excludes components of accommodation and private transport in its measurement.

Meanwhile, the CPI All-Items inflation remained unchanged in September, an improvement from the 0.4% decline recorded in August. The was thanks to a more graduate decrease in private transport costs, which slowed to -0.1% in September from -2.3% in the previous month.

Overall, both MAS core inflation and the CPI All-Items inflation are expected to come in between -0.5% to 0% in 2020.

By sector, services costs fell more modestly at -0.1% in September from -0.5% in the previous month as a result of steeper increase in telecommunication service fees, as well as a smaller drop in tuition & other fees.

The cost of electricity and gas also registered a slightly lower decline at -14.2% from -14.6% a month earlier, on the back of slower take-up of new subscriptions under the Open Electricity Market (OEM).

Similarly, food inflation was unchanged as the price of non-cooked food and food services rose by the same pace, at 1.8%.

In the coming quarters, MAS and MTI expects inflation to remain low amidst weak demand in key commodity markets as well as the persistence of negative output gaps in Singapore.

The accumulated slack in the labour market is also forecasted to weigh on wages.

Core inflation is expected to turn mildly positive in 2021, as the disinflationary effects of the government subsidies introduced this year fade, and with demand for domestic services forecasted to gradually pick up.