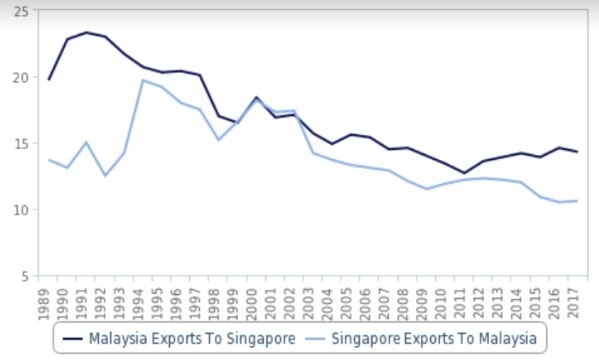 The postponed HSR project caused a strain in the countries' bilateral trade relations.

This chart from BMI Research shows that exports between Malaysia and Singapore have been on a downtrend over the last 30 years.

Malaysia is Singapore's second largest export destination, even though its share has trended lower from a high of close to 20% in 1994 to 10.6% in 2017. Meanwhile, Singapore is amongst Malaysia's top overseas shipment locations, accounting for 14.3% of total exports in 2017, despite declining from 23.3% in 1991.

BMI Research believes that the postponement of the high-speed rail (HSR) project between Singapore and Malaysia has put the relationship of the two countries under fire. The said project was initially decided upon under the Najib administration in 2013 and was initially eyed for launch by 2020.

“The seemingly deliberate lack of clarity on the issue by the Malaysian government despite repeated requests for official clarification from their Singaporean counterpart, is a clear sign that bilateral relations are likely to be more fraught under Mahathir,” BMI Research said.

The firm thinks that the upcoming negotiations will put to light an agreement on the countries’ definite plans regarding postponement and whether Malaysia will grant Singapore’s compensation request.

In addition, tension looms between the two amidst the 99-year Water Agreement as Malaysia said that it will try to renegotiate the terms of the water supply deal.

“We note that water supplies were not an issue under the Najib administration, with Lee and Najib both affirming in 2018 the importance of ensuring the reliable and adequate water supply from the Johore River as stated in the 1962 Water Agreement,” BMI commented.