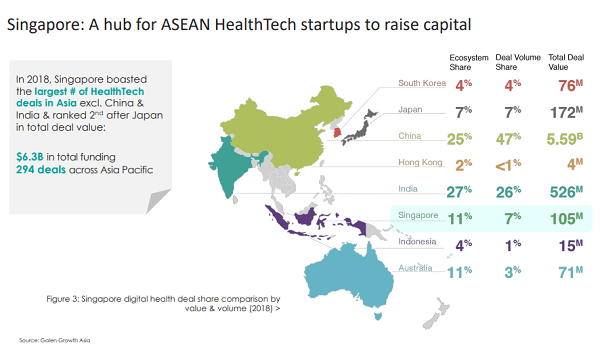 The city trails only behind China and India in terms of deal value.

Singapore raked in $145.78m (US$105m) of healthtech deals in 2018, making it the city with the fourth largest deal volume in Asia, according to a report from Galen Growth Asia. The city accounted for about 7% of 294 deals across Asia-Pacific, tied with Japan at third place.

The percentage of Singapore startups in Pre-A and Series A stages grew to 6% and 10%, respectively, from 4% each in 2015.

There have been 58 unique investors in the past 12 months, led by SG Innovate with four investments. This is followed by Heritas Venture Fund, Venturecraft and Wavemaker Partners with two investments each over the same period.

Amongst the top 20 Singapore-based healthtechs, a fifth operate only in Singapore, with 40% within Asia. The remaining 40% operate globally.

Additionally, out of the $19b public investments in research & innovation, $4b alloted to the health and biomedical sciences sector for 2015-2020.