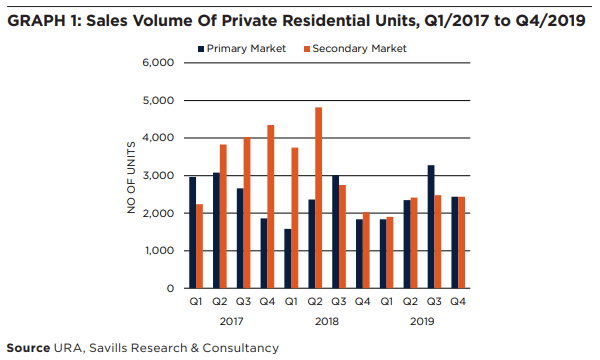 Developers held back launches during the festival season.

Private home sales in Q4 2019 fell by 38.6% QoQ to 2,226 new uncompleted units as developers held back launches amidst the year-end holiday season, according to data from Savills Singapore.

With less new supply, primary sales in Q4/2019 correspondingly fell by 25.5% QoQ from the previous quarter to 2,443 units. By market segment, new sales in the OCR accounted for 46.5% of the total, followed by the Rest of Central Region (RCR) and CCR at 37.0% and 16.5%, respectively. The top five best-selling projects in Q4 were Parc Esta, Sengkang Grand Residences, Treasure At Tampines, One Holland Village Residences, and Jadescape.

Sengkang Grand Residences, a 680-unit residential project in an integrated development at Sengkang Central, was launched at the beginning of November 2019. Based on the caveats captured in Realis, a total of 232 units were sold at an average price of $1,746 psf by year-end.

The other three top-selling projects mentioned above have been previously launched projects. “These projects’ convenient locations and attractive per sq ft prices compared with newer launches continue to be the key drivers moving sales. In addition, some developers continued offering attractive commissions to agents to promote the unsold inventory in their projects, which also played a part in encouraging sales,” said Savills Singapore CEO Marcus Loo.

“Besides external factors, such as economic uncertainty and weak job market, new projects’ benchmark prices and hefty stamp duty paid for the second property and above continued to be the main drags in the sales market. In addition, buyers may have adopted a wait-and-see approach in view of ample launches in the future,” Loo added.

Resales and sub-sales remained stable on the other hand, with a total of 2,435 units sold in the secondary market in the last quarter of 2019. This was just 1.9% lower than the number registered a quarter ago. In view of the impact of the year-end holiday season, the sales volume was quite healthy, especially in the CCR, which posted a 6.2% QoQ increase to 569 units.

Permanent residents (PRs) and foreigners bought a total of 970 condominiums and private apartments in the same quarter. Although the transaction volume fell by 7.9% QoQ, their combined market share has increased by 2.1ppts QoQ to 22.4%.

By nationality, top non-Singaporean buyers in the final quarter are still from China, Malaysia, India and Indonesia, who acquired a total of 492 units. In addition, foreigners who did not specify their nationality also bought 288 units which were all sold in the primary market.

The price drop in these two market segments could be due to two reasons. One is that some new projects were launched with relatively attractive prices in Q4 compared with those launched in the previous quarters mainly because of their location attribute. The second is that given the hedonic construct of the URA index, there could be attributes for the units transacted in those regions that the model could not adequately explain, for example, layout of unit, orientation of unit, Loo said.

Despite the holiday season, transaction volumes and prices in the high-end market remained stable. Figures compiled by Savills showed that the prices for high-end, non-landed residential projects edged up 0.3% both QoQ and YoY in the last quarter and by end-2019, averaged at $2,410 psf.